The Times We Lived In: Faye Dunaway - a star in stripes 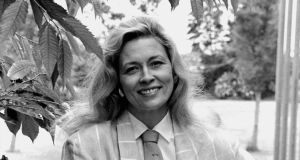 Okay, it was the 1980s, and we all had some – um – interesting outfits in our wardrobes. But then again, we weren’t superstar movie stars.

In 1984, Faye Dunaway was one of the brightest lights in the movie cosmos. Having shot to fame with Bonnie and Clyde in 1967, she made a string of hits throughout the 1970s: Chinatown, The Towering Inferno and Network, which won her an Oscar. In 1981 she starred in the infamous Joan Crawford biopic Mommie Dearest.

So when she came to Ireland it was front-page news. Our photographer was sent to catch up with her at the Phoenix Park where, says the caption, “she attended a race meeting . . . the proceeds of which went to the World Mercy Fund, an American charity which aids African countries. Later she attended the World Mercy Fund gala ball”.

Dunaway has a reputation for ferocity. Nevertheless she seems to have posed quite happily for our cameraman, who has recorded her radiant smile, impressively perfect lipstick and that instantly recognisable mane of blonde hair.

Just why she is dressed up as a man, and wearing the suit of a man who is several sizes larger than she is, is – sadly – not explained. Perhaps she was still annoyed about not getting the part of Daisy Buchanan in The Great Gatsby, and decided to show the world she could easily have played, not just Daisy but Gatsby himself, dammit. Or maybe, as she was going to a charity gig, she bought her outfit from a charity shop – and they didn’t have her size.

While the caption steers clear of the suit, the image accentuates it. Everywhere you look in this photo there are straight lines. The metal railings Dunaway is leaning on; the verticals of the building on the right of the shot; the fence in the background; even the leaves on the tree. All cry, in unison: “She’s a star – but hey! Look at those stripes!”

My days of eating meat at every meal are over
9