Sean Moncrieff: ‘You were a waster if you didn’t aspire to present the Late Late’

Moncrieff, a unique radio host, is back on TV – a medium that never quite got him – with a quiz show. He talks work, children, feminism and his fears for society 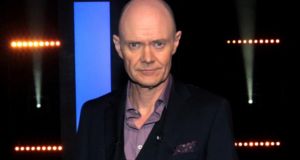 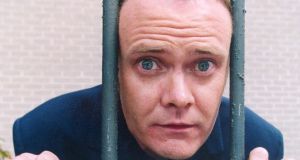 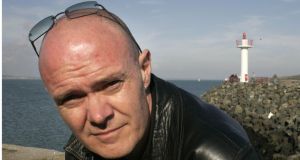 Sean Moncrieff is punctual and thin – very thin. He has the same sandwich for lunch every day: chicken and coleslaw. He seems a bit wary that this modest fact might leave him open to charges of being possessed by some sort of obsessive compulsive disorder: “I’d be a wee bit OCD.” But actually it has been demonstrated – in the sort of survey that could feature on his very good radio programme – that successful people don’t really get creative with food, and eat the same breakfast every day. Sean Moncrieff could get a good half an hour out of this sliver of information, but I forget to mention it.

Anyway, we establish that he is a creature of routine. He gets up at 7.20am every day, but as a parent of three school-going children, he has to be regular, as it were.

He has a pattern of work, a pattern to his days – he writes his books on the Dart as well as, presumably, elsewhere too.

The routine has changed slightly with his new quiz series on TV3, Crossfire , and the fact that he had to record all the programmes and then do interviews to promote them.

“Normally I wouldn’t be in town yet,” he says, as if it were a bit exotic. He is wearing what appears to be a series of cardigans. His speech is so clear and organised that he sort of interviews himself.

Would you like your bottom read?
When he arrives into work at Newstalk each day the brief for the programme items are on his desk. “Then I try to memorise the main points of all the briefs,” he says. Which seems remarkable.

(Speaking of briefs, this interview takes place before Moncrieff has his bottom read, on air, by a psychic. The “rumpologist” has the following observations: “You have a flat bottom, which is good, so you should be proud of it. I feel that you’re a very straightforward guy, very much a family man.”)

Moncrieff’s show itself, in a radio culture that consists mainly of listening to journalists talking on bad telephone lines, is also remarkable – the slot Movies and Booze on Fridays alone makes that clear – and he has a strong following. He sounds like he enjoys it.

“I can be narky with people sometimes. But, oh yeah, even on the odd day I’d be in a bad mood, after three hours of the programme I’m in a good mood.”

Actually, I remark, his audience is bigger than that of Newstalk’s super-signing, Pat Kenny. We must point out, he insists modestly, that we only know his audience is bigger than Kenny’s was when Kenny took over. Or something like that. The methods used to calculate radio listener figures are a mystery wrapped in an enigma, but Moncrieff’s figures are good. One can only hope Moncrieff is being paid the same salary. “I don’t know. I don’t know how much Pat Kenny’s getting paid,” he says. (This is a very Sean Moncrieff reply.)

“I was extremely lucky. When I went to Newstalk they didn’t feel they were doing so well. I’ve been there 10 years and the audience for the show was a long time in growing. It’s still not for everybody – by a long chalk.”


A difficult show to explain
Even he finds it difficult to explain the programme. When a new researcher arrives it is hard to articulate exactly what sort of material he or she should be looking for. “It’s more: you’ll know it when you see it.”

In the Newstalk offices, he says, he doesn’t socialise much. “Not particularly. Only with people on my immediate team. And George [Hook] will often complain about something.”

Asked if he ever expected to be in this successful position – if it was ever his ambition – he says: “I’m happily surprised. As you go through life, your aims change.” When he was a kid he wanted to be an astronaut. “I still wouldn’t mind being an astronaut,” he says.

Then he wanted to be an artist, but decided against it as he thought his drawing wasn’t good enough. There is a brief old- fogey section here as we harrumph that not being able to draw would be no obstacle in “modern art these days”.

The new Crossfire series notwithstanding, he is a radio person who started in television. He presented the comedy panel game show Don’t Feed the Gondolas from 1997 to 2001, and television never really knew what else to do with him. It wasn’t that he didn’t get mainstream television, it was more that mainstream television didn’t get him. “Essentially you were a waster if you didn’t aspire to present the Late Late at some point in your life,” is how he puts it. And he did not aspire to present the Late Late . So he gave up telly. “And where I am now is better than where I was. It’s 10 times more interesting.”

I would like to see him present a documentary series. “So would I,” he says. “But I’ve done nothing about it so far.”

Where he is now has as much to do with his English teachers in St Joseph’s College in Ballinasloe as anyone else.

“The word ‘parenting’ didn’t exist when I was a child. Now we parent the shit out of our children. I sometimes wonder if that does more harm than good. I’ve a son of 22 who’s finishing college, and he’s still living at home. I don’t want to do the ‘when I was your age’ thing, but I’d been out of home since I was 16. This is no reflection on him – all his peers are living at home, and they might leave home when they’re 32.”

It must be said that the boy’s father doesn’t look too upset at the prospect. He is now separated and lives near his former wife in Howth. They also have three daughters, who are still at school. One of them, aged 13, has written a book, which her father put on Create Space, a self-publishing site. It is 40,000 words long. “You can buy it on Amazon,” he says.


The disappointed socialist
He describes himself as a disappointed socialist and, when asked about the Labour Party, says “it would be nice to have a good socialist alternative”. But his worries for the future of society are more surprising. He talks about people in San Francisco – “young people who’ve sold an app and are now millionaires”, and who “don’t have to work because they can do coding” and their “overwhelming smugness”. He worries that society is becoming atomised. He has a horror that in this country we are pursuing that type of culture – that we have come to believe “it’s better to be a stupid millionaire than it is to be an intelligent person who makes a reasonable wage”.

He also describes himself, unhesitatingly, as a feminist. Maybe it’s having three daughters, but it seems more to do with his observations of the public. “There’s a small cohort – and I hope it’s a small cohort – of men who are utterly misogynistic.” These are the people who ring up to complain about a female guest on his show . “It’s always ‘your one’. For some reason, no one ever knows their name if they’re female. But if they’re a man they know exactly who they are.”

At night he falls asleep at different times “depending on who Vincent Browne is shouting at”.

It is a media existence, when you think about it. And he has.

Crossfire airs weekly on TV3 every Monday and Friday at 8pm

Favourite book?
Ehhhh . . . The Emergency Kit. Which is a collection of poems. It’s on my desk and I try to read one a day but always fail to do that.


Which phrase do you overuse?
Ehhhhh.


Last time you cried?
I think maybe about two or three months ago. Not blubbed, but
teared up.


What happens when we die?
I have no idea.

If garda í were taping your phone, conversations what would they hear?
A lot of “ehhhh . . .”

If you went to university now what would you study?
I’d like to do a PhD in something, probably something relatively obscure – like philosophy.


Guiltiest pleasure?
I don’t think you should be guil ty about pleasure. Especially as you get older, any pleasure you get is a good thing.


Worst childhood memory?
I remember being about 13 or 14 at a disco and a girl came up to me and asked me to dance. She had really short hair and I thought she was a boy and I said, “You’ve got to be joking.”


Best advice you ever got?
I can’t think of any. Socrates said “the only thing I know is that I don’t know anything” .