Remembering the Dublin Junior Accordion Band – entertainment was scarce back then

Family Fortunes: We played a great repertoire of waltzes all over the city around 1949 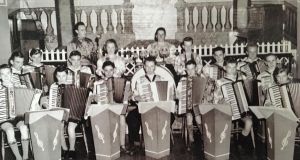 This is a photograph of the Dublin Junior Accordion Band in the Carlton Hall, Shelmartin Road, Marino, in and around 1949. I am third from left in the second row.

We played in many halls in Dublin and environs at a time when entertainment was mainly homegrown and scarce in the postwar years. There was no television and Radio Éireann only broadcast in the evenings. The band appeared in the Queen’s Theatre, Pearse Street – later it was used as the Abbey Theatre, when the original Abbey was being rebuilt as it is today. The band played other venues such as Fr Mathew Hall, Church Street; halls in Rathmines, Milltown, Skerries and Tullamore.

A great repertoire included an Irish waltz selection (When Irish Eyes are Smiling, etc); and old time waltz selection (A Bird in a Gilded Cage, etc). Music from the Student Prince, The White Horse Inn, Kiss Me Kate. Also popular songs and music of the day: Soronto, Valencia, Plaisir D’Amour, Moonlight Serenade, The Emperor Waltz. The only girl in the band danced an Irish jig. Our singer sang the pop songs of the time including those made popular by Mario Lanza.

I left the band some time later to pursue other interests including serving an apprenticeship to be a compositor in the printing industry.

I retired in 2000 after 37 years working in the caseroom of The Irish Times. In 2009, on reading an article in the Bealtaine Festival brochure inviting older people who once played instruments to take them out of their cases, I dusted mine off and joined fellow musicians in rehearsing and performing together in the National Concert Hall. A humble ensemble of 29 musicians performed in the John Field Room to an audience of 100 invited guests that year.

On June 4th last, the Blow The Dust Orchestra consisting of 65 musicians playing a variety of 20 different instruments celebrated its 10th anniversary in the auditorium of the NCH to a near full house, under its conductor and arranger Joe Csibi. It is now the National Concert Hall’s resident community orchestra for older people.

The piano accordion lost its popularity for house parties and community-hall ballroom dancing when the 12in vinyl records arrived, heralding the advent of the DJ. The film “Rock Around the Clock” starring Bill Haley. Then Elvis Presley, The Beatles and the showbands, giving us the great big band sound of the Glenn Miller Orchestra; popular singers such as Bob Hope, Nat King Cole, Johnnie Ray, Matt Monro, and many more. All contributed to the decline of piano accordion music and community hops.