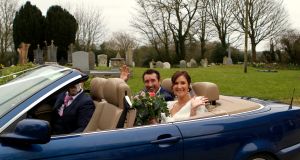 Annie, from Blackrock, Co Dublin, and Antoine, from Bray, met in a mutual friend’s house in 2012 watching Ireland play England in the Six Nations Championship.

Annie was planning to move to Perth a short time later and after dating for two months, Antoine decided to join her. They left together on October 30th, 2012.

After getting engaged in Dungarvan while home for Christmas two years later, the couple spent a year planning a travel-themed wedding from their home in Perth with the help of their families. On March 19th, 2016, they were married at St James’s Church in Horetown, Co Wexford.

Annie walked up the aisle, with her father Ernie, in a dress by Anna Campbell.

The bride’s best friend Jarra arranged the flowers along with the mother of the bride and a baker known to the family made seven pies in lieu of a wedding cake (by special request of the bride who, “loves an ol’ apple pie”).

The groom’s aunt Deirdre was the photographer and his father’s BMW convertible – a “do-up project” – was used as the wedding car. Antoine’s parents are Breffni and Eavanna Maher and his sister Tara was the “wedding planner”.

Everyone was sure all eventualities were covered. But when the band was taking a break, the circuit breaker failed, plunging the wedding party into darkness.

“Guests left as we stood around for 45 minutes not knowing what was happening,” she says. The power was eventually restored thanks to the best man, electrician Warren Robinson, and two other electrician wedding guests, but at that stage the guests had gone back to their rooms.

“Coming all the way from Australia and only seeing our friends and family once a year, it is heartbreaking to see your guests leaving.

“I married the love of my life and it will be a wedding no guest will ever forget. But I do believe . . . the wedding day doesn’t matter, it’s the marriage that does.” Photographer: Deirdre Ridgway