Our wedding story: He invited me home to feed the babies 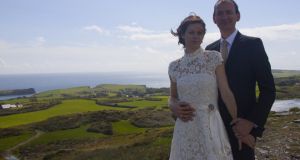 Before the reception in a marquee at The Castle in Castletownshend, Veronica and Neil climbed to a local Bronze Age fort for photographs.

On their return from a field trip collecting butterfly larvae, Neil asked Veronica if she wanted to “come and help me feed the babies?”

At first they kept the relationship discreet but their cover was blown at an Aboriginal festival. Not only was Neil’s supervisor staying in the same campsite but a photo of the couple taken at a basket-weaving workshop appeared in Jetstar’s in-flight magazine.

Six years later, they were married on August 29th, 2015, in Kilfaughnabeg Church, where Veronica’ parents had their wedding, overlooking Glandore harbour.

The church was decorated with montbretia flowers and ferns and Veronica walked up the aisle, with her godfather Noel, bridesmaid and flower girl, to a piano piece she had recorded as a surprise for Neil (Chopin’s Nocturne in E flat major), and accompanied by her niece on flute.

At the end of the service the bride’s nephew played the married couple out on a trumpet to Verdi’s Anvil Chorus.

Before a marquee reception, catered by Galty Valley Catering, at The Castle in Castletownshend, Veronica and Neil climbed to a local Bronze Age fort for photos.

After dinner, guests were instructed to change into old clothes for twilight/night kayaking led by Jim Kennedy of Atlantic Sea Kayaking.

“It was the first thing I was certain that I wanted when beginning the wedding planning process,” said Veronica.

Everyone returned to the Castle afterwards for homemade chocolate brownies by the fire pit and a surprise performance by a guest who captured the couple’s story in a song that started off with: “Come listen to a story, now and hear a little tale, about a boy who met a girl who had a thing about a snail . . .”

Veronica and Neil went glamping for their ‘mini-moon’ in a Mongolian yurt on Cape Clear island, with family and best man. The wedding was deemed a success, and only one guest missed his flight back to Australia.