Our Wedding Story: An engagement in London and a wedding in Bansha 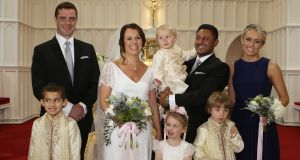 Maria, who is a manager with a pharmaceutical company, is from Mountmellick in Co Laois and met Shumon, a software consultant, through friends on a night out in 2011.

In front of their immediate families, the couple had a Muslim blessing on November 8th in the Rathfarnham home of Shumon’s parents, Dr Kashmeri and Prof Saleem Hashmi.

They were married by Fr Bruce Bradley SJ in the Church of the Annunciation in Bansha on November 20th, 2015.

Maria, in a dress from The Suite on Drury Street, walked down the aisle with her father Jim to a favourite song of theirs: the tango, Por una Cabeza, from the film Scent of a Woman.

The reception was held at Kilshane House. “It was one of the few places I called and the only place I went to see,” said the bride.

Family and friends contributed hugely to the day. Maria’s mother Mary and friend, Lisa O’Grady, made the cake. Julieanne Walsh of Paper Rock Flower arranged and styled the flowers and Kieran Connolly drove the wedding car, his 1952 Bentley.

A surprise after-dinner performance by opera singers was a highlight of the day for the couple whose first dance as newlyweds was to We’ve Only Just Begun by The Carpenters.

Maria and Shumon live in Rathfarnham and honeymooned after Christmas in Sri Lanka and Dubai.

An Irishwoman in Milan: ‘Everything that usually seems important suddenly isn’t’
3

What’s the point of moving home if our kids will have to emigrate?
8

Should you eat three meals a day – or 17 tiny ones?
Real news has value SUBSCRIBE