New to the Parish: ‘Moore Street takes me back to my Moroccan childhood’

Hassan Lemtouni met his Irish wife in the US before they moved to Dublin. He feels the history and the ‘energy of 1916’ in the inner-city streets 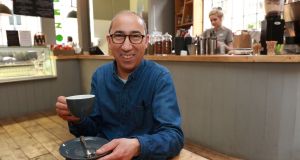 Hassan Lemtouni: “Every time we were in Dublin you’d turn on the news and everyone was complaining about the economy. I couldn’t see the light.” Photograph: Nick Bradshaw

A love of cooking is in Hassan Lemtouni’s blood. He is the fourth generation of his family that has been dedicated to a small restaurant in central Marrakesh. However, unlike his brother, who still runs the family restaurant, Lemtouni discovered his love of food halfway around the world.

Lemtouni arrived in Minneapolis in December 1984, during one of the coldest winters in that American state’s history. For a recent graduate who had arrived from Morocco via Paris to learn English, it was a shock to the system.

“I was like a little kid. My eyes just popped when I saw people shovelling snow to get out of their homes.”

The friendly nature of the locals in his new home helped him survive that first freezing winter. “Back then, coming from north Africa was almost a novelty, because they hadn’t met many people from there. Minnesota in the 1980s was one of the most progressive states in America. It felt like I was at home right from the beginning.”

He began working under the head chef at the Hilton hotel while studying English. “The chef was Austrian but he was dating a Moroccan. He said, ‘I’m gonna make a chef out of you’, and then he gave me bags and bags of onion to slice for onion soup.”

After meeting his first wife, the couple moved to Athens, Georgia, where he opened a restaurant called Marrakesh Express.

“It was not only a strong community, Marrakesh Express created a new family that everyone embraced. Athens introduced me to fatherhood, and it turned out to be one of the greatest experiences of my life.”

When his wife was offered a job at Penn State University, the couple and their two young daughters moved to Pennsylvania. After less than two years in their new home, the marriage broke up.

“At the time I wanted to escape back down south, because it was a comfort zone for me. But I went to New York, first to visit a friend, and decided to stay because it felt like a challenge. I’ve always felt the urgency to try new things and take on new challenges.”

He discovered a new passion in New York after he began working at a home design store in Brooklyn. Within a few years he had bought the lease to the store and opened his own business. He was at a friend’s birthday one night when he met a young Irish woman called Seona. The couple began dating and quickly fell in love.

When Seona invited him to visit her home country, he did some research on Ireland. However, nothing could have prepared him for the wilds of Connemara.

“We were picked up from the airport and went directly to Connemara. I had read a bit about Ireland, the beauty and the greenery, but Connemara was different. It almost had its own personality and reminded me of when you go to the Atlas mountains. You’re so far out and the language is different. Connemara had that feel.”

A few years later the couple were married at New York City Hall, followed by a small celebration on the walk home. “A handful of our friends got some cupcakes and Champagne, and we opened the bottle on the Brooklyn Bridge.”

In 2008 Aifric was born, followed two years later by Ailbhe. Seona was eager that the girls grow up in Ireland, but Lemtouni was hesitant about moving in the middle of a recession. “Every time we were in Dublin you’d turn on the news and everyone was complaining about the economy. Politically it was going downhill, economically it was going downhill, there was nothing exciting about it. I didn’t see myself opening a business with the economy like that. I couldn’t see the light.”

A visit to Dublin in 2011 changed his mind. “We came to visit for a month and it was great to see the change of pace. Restaurants like the Fumbally were opening up, places that reminded me a lot of Brooklyn.”

In 2012 the family moved to Ireland and Lemtouni began looking for work. The search brought him to an empty warehouse on Kings Inn Street that had once housed a chocolate factory. “I walked into the building and fell in love with it straight away. It reminded me so much of Dumbo or Williamsburg, where people are reviving buildings.” Two years later he opened the doors of Blas Cafe.

He loves the area around the cafe and says the streets of north inner-city Dublin are filled with the nation’s history. “When you look at the architecture, just up the street from me, that’s the history of 1916. The energy those people carried with them, it’s still here. It’s on all the street corners.”

Every morning he walks over to Moore Street to buy fruit, vegetables and meat for the Blas Cafe kitchen. “Moore Street takes me back to my childhood in Morocco. When I was a kid I would go with my mum, carrying the groceries for her and going to all the vendors. Moore Street is just like that with the piles of fruit and vegetables.”

Living in Dublin also makes it much easier for him to visit family in Marrakesh. “Ryanair has changed my relationship with Morocco. From America I had to be in Morocco for at least three weeks to justify spending that much money. Now I can go for a week and I’m totally happy.”

He is eager that his four daughters learn to value their Moroccan heritage, and last year he arranged for his two eldest to spend three weeks in Marrakesh. When he first moved to the US, he missed his north African home. However, his sense of home has evolved over the years.

“When I left home I was young and you don’t have your own ideas yet. You change and grow with experiences in life. Now I’m on a new journey in Ireland. I’m a lover of life, and from Minneapolis to Athens to New York to here, I’ve embraced it all and opened my arms to whatever the world has to offer.”

Spring dresses to dream about

Today is the day I run out of HRT patches. Consider yourself warned
3

Children of the new Northern Ireland
4

Róisín Ingle: Hairwise, it’s only a matter of time before we go full Sinéad O’Connor
6

Isolation on the Wild Atlantic Way: ‘I stopped here for the day – and never left’
7

Coronavirus: Is now the time to dream bigger about how we live our lives?
10

What sold for €265k in Dublin city, Poppintree and Co Wicklow
Real news has value SUBSCRIBE