Meet gentle George the chicken dog and his hentourage 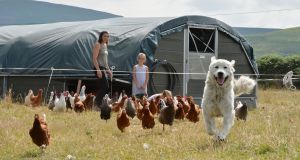 George the chicken dog with his flock of hens. Photograph: Alan Betson / The Irish Times

A dog called George is running across a sunny meadow towards us, wagging his huge tail. It’s as long as a man’s arm and fluffy as a feather boa. “We’ve got a big sloppy dog,” farmer Clotilde Kiely explains to my two sons. “He’s really drooly ... He’s very good but he always wants to play with us.”

The thing that sets George apart from other sloppy playful dogs is the wave of happy brown, grey and speckled hens trotting in his wake like a devoted entourage (hentourage?). They are George’s pack. It is his job to protect them from the foxes and mink of the Comeragh mountains who can smell a henhouse from miles away and consider it an invitation to a killing spree.

Clotilde Kiely is not a typical poultry farmer not least because she is using dogs rather than fences to protect her flocks. For the last 2½ years she has been building up Comeragh Mountain Poultry, a hen and broiler farm at Ballynamult near Kilbrien in Co Waterford. The chickens feed on pasture, pellet feed, oats and barley and cuttings from the new polytunnel. George and his fellow protection dog, Bruce, keep the flocks safe. Mink have been around for the last 20 years, descended from escapees from a mink farm in Ring. But Kiely hasn’t lost a chicken to a predator yet.

George and Bruce are Pyrenean Mountain Dogs, Kiely explains as we walk around the hen paddock followed by George and his hens. When he throws himself to the ground in play the hens calmly step out of his way just before he lands.

Protection dogs have strong guardian instincts. A similar Italian breed of protection dog saved a colony of small penguins from extinction on an island off Australia in the early 2000s. The dog, called Oddball, worked for a chicken farmer on the mainland. She had a film of the same name made about her and the island became an overnight tourist attraction.

Pyrenean mountain pups are taken from a litter at seven weeks and put into a flock of lambs and ewes, Kiely says. The farmers “kind of starve them from human interaction – not starve them in a cruel way – but they get used to being with the flock.”

“They want them to bond with sheep, not a human master, and not to bond with other dogs, so that’s why you give them minimum interaction. You feed him every day, give him a pat to say ‘I am your owner’ and leave him interact.” The dog begins to feel like they’re part of a flock, the sheep (or, in George’s case, the hens) are a pack they have to defend.

He likes chasing crows and magpies away and sniffing out eggs laid in hedgerows by the younger hens who haven’t learned to lay in the henhouse. At 18 months old George is still in training. Sometimes he has to wear a muzzle because in moments of boredom he might pick up a hen and with the size difference (George is waist high) that’s not an ideal interaction.

George’s flock is a mix of the common Rhode Island Reds and many other breeds: Cuckoo Marans, Blackrocks, fluffy grey Daisybelles and a white Sussex. “We like diversity here,” Kiely says. “We like to see different splashes of colours. In commercial poultry they just standardise everything.”

In the yard a brooding house has been made from a converted shipping container. Kiely feeds the chicks pellets that are not organic but are antibiotic-free. Most chickens have antibiotics added to their feed to prevent illness spreading in cramped conditions. Kiely gives her broilers cider vinegar once a week and occasionally a mash made with raw milk.

This morning she has picked dock leaves and she throws a bundle to the three-week-old chicks to get them used to eating greens.

In the broiler paddock where the sides of the moveable housing are open to let the chickens wander in and out Bruce patrols the paddock. Unlike George Bruce is wearing a muzzle all day. “I love him but I’m really cross with him. He just picks them up and if I didn’t come in time eventually he’d hurt one. He likes to gather them and he likes to boss them round a bit too much for my liking,” Kiely says. Bruce has his muzzle taken off at night when he sleeps on guard outside.

Kiely started farming because she couldn’t find chicken that tasted like home. “I’m a French woman and in France we like good chickens.” French farmers educated people about cheap battery chicken, explaining how much it costs to rear chickens for longer and let them roam on pastures. “The main difference is that it actually tastes like chicken. There’s a real meat taste to it,” Kiely says. “And the texture is very different. Instead of being a foamy kind of material it’s really fibrous, like any meat.” Then there’s the skin which is browner and crispier when cooked. “With a supermarket chicken it’s really difficult to crisp the chicken because there’s so much fat. These guys are moving a lot so they don’t have a lot of time to put a lot of fat on.” Their bones are stronger because of the exercise and the fact that they live four weeks longer than battery chickens, typically slaughtered at six weeks.

Living in Ireland for seventeen years Kiely’s husband works as a butcher in the family shop in Waterford. That butcher shop is closing so the couple hope to start processing the chickens on the farm themselves. At the moment the nearest processor is in Skibbereen. She sells frozen chickens directly through a Facebook page at €7 a kilo. She can’t sell the eggs in a shop because they need a grading machine to size the eggs to be a registered seller. “The smallest machine costs €4,000” In the meantime she does a great egg trade with locals and the parents in the small school where the couple’s two daughters go to school.

In the polytunnel beefy gnarly tomatoes are green but ready to darken up. They’re a French variety called Noir de Crimee. “Everything is motivated by me not finding what I wanted. I was frustrated in supermarkets and even in local growers that you could not find different species of tomatoes and even if you try to grow it they would be the Moneymaker [variety]and the random commercial ones that are not as flavourful.”

Kiely’s parents moved out of Paris when they were in their forties to farm a smallholding. Her mother worked as a microbiologist in a city lab and her father grew food and kept animals. In a paddock opposite the hens a small black French pony grazes. She’s the oldest animal on their small farm, called Nini, short for Honey. Kiely got her when she was a twelve year old schoolgirl. “So you took the horse from France?”. She’s been living in Ireland long enough to get the joke and I’m probably the umpteenth smart alec to crack it.

Growing this kind of food in such a beautiful setting feels right, a sort of food homecoming. “We sold our house in Dungarvan to do this. It was a lovely place but I really wanted to do something meaningful. That was our motivation.”

Their rented house is beside the fields close enough for her to open the door every now and again and yell, “Gentle George,” in the direction of the hen house, just to keep her trainee protection dog on the straight and narrow.