Long-serving and ‘compassionate’ member of the judiciary 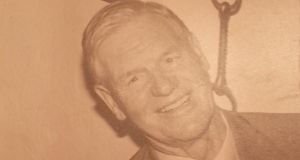 Patrick Johnson: Described as “tough but compassionate”, he was, according to colleagues, always conscious of the pressure that ordinary people were under.

In a long career on the bench Patrick Keenan Johnson was, according to a recent tribute in the Kilkenny People newspaper, “very popular even with defendants”.

The former District Court and Special Criminal Court judge, who has died aged 90, enjoyed a distinguished legal career in which he also served as a solicitor.

Born in Ballymote, Co Sligo, on November 3rd, 1922, he used to tell his children that on the night he made his entrance into this world the creamery in Ballymote was burned down, as it was at the height of the Civil War.

Judge Johnson was the second youngest of six children and attended Ballymote National School, where he was taught by John A Barnes, father of former director of public prosecutions Eamonn Barnes.

After completing his matriculation exam he had the distinction of going directly from national school to University at the age of 16, studying law at UCD.

Seven months after qualifying as a solicitor in 1943, at the age of 21, he opened his own practice in Ballymote with a sub-office in Riverstown, specialising in litigation, conveyance and probate.

He was appointed a judge of the District Court in 1975 and was soon assigned to the then district of Rathfarnham and Dundrum but spent the bulk of his career on the bench in Waterford and Kilkenny. Concern for young people in trouble and an abhorrence of violence were his trademarks.

Described as “tough but compassionate”, he was, according to colleagues, always conscious of the pressure that ordinary people were under .

Regarded as a colourful judge, he once asked a young court reporter if he, like the defendant, could drink 12 large bottles of cider in one sitting, “adding rhetorically that he certainly wouldn’t be able to”, according to the Kilkenny People .

Judge Johnson was a driving force behind the Waterford charity Children’s Group Link.


‘Non-playing captain’
He also had a keen interest in amateur dramatics and according to his son, Circuit Court Judge Keenan Johnson, he was the only “non-playing captain” in the history of Ballymote golf club – having won the honour because of his ability to organise the social side of club events.

He married Helen Stephens in 1949 and they had five children. But he was devastated by her death after a short illness in 1966.

In 1970, he again found happiness and married Therese Campbell from Trillick, Co Tyrone, having proposed just four weeks after their first date. They had two daughters, Helen and Geraldine, and according to his family he revelled in the fact that his younger daughters were the same age as his grandsons.

In 2005 he returned to live in his native Sligo.

He is survived by his wife, Therese; daughters Ann, Patricia, Helen and Geraldine, his sons Brendan, Keenan and Hugh, his sisters Sheelagh and Monica (Tighe), grandchildren and great grandchildren.