Obituary: Lithuania ghetto survivor who led plot to poison Germans after the war 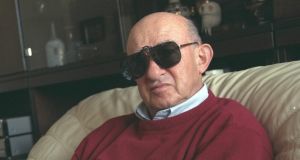 Imagine a real-life version of Inglourious Basterds, Quentin Tarantino’s quixotic movie about Jewish avengers in the second World War – but in this case involving a plot by a band of refugees to kill millions of Germans just after the war by poisoning their water supply.

The plot, which targeted five major cities in retribution for the Holocaust, failed. So did the conspirators’ Plan B, which followed in mid-April 1946: to murder 12,000 captured SS officers – members of the very unit that enforced the Nazis’ reign of terror and ran the death camps – by lacing their bread rations with arsenic.

The second scheme was not a complete failure, however. Led by 21-year-old Joseph Harmatz, a survivor of the Vilnius ghetto in Lithuania, the plotters sickened more than 2,200 German prisoners, inducing vomiting and other symptoms of cholera. Their weapons were 3,000 loaves of black bread, which had been painted with a mixture of arsenic and glue at a bakery, which one of the group had infiltrated.

Harmatz, who died at 91 on September 22nd at his home in Tel Aviv, Israel, never publicly expressed remorse for his role in either conspiracy. But later on, his son Ronel said, he did acknowledge privately that he was grateful that the mass water-poisoning plot was abandoned after one of his collaborators was arrested.

“He did admit that it is good that this plan did not happen,” the younger Harmatz said. “He knew at the back of his heart that it would have damaged” the prospects for a state of Israel, then being advocated, “and that they would have compared the Jews to the German people.”

Still, he said, Harmatz was sorry that Plan B, to fatally poison the imprisoned SS officers, had not been as successful as he had hoped. The conspirators claimed that the poisoned bread killed several hundred prisoners at Stalag 13 in Langwasser, a district of Nuremberg. That was never confirmed, but army investigators found enough arsenic at the bakery to kill tens of thousands. “Was he sorry? He was sorry that it didn’t work,” Ronel said. “He wanted to do more.”

The conspirators were made up of 50 or so former guerrillas who had fought the Germans from the sewers of the Vilnius ghetto, where the Jewish population plunged from about 40,000 to a few hundred during the war, and from the Rodniki forest south of Vilnius, now the capital of Lithuania that was also known then as Vilna. They reconstituted themselves in Bucharest after the war ended, in 1945, and become known as the Nakam, Hebrew for avengers. Its mission was simple. “Kill Germans,” Harmatz told the Associated Press this year. How many? “As many as possible,” he replied.

The avengers were believed to be responsible for the kidnapping and killing of countless individual former Nazis in Europe and elsewhere after the war. In another daredevil plot, they sought to assassinate more than a dozen top Nazis on trial for war crimes in Nuremberg, only to cancel the operation after failing to find US guards to help them.

Ronel Harmatz said he never doubted his father’s motivation: “He wanted the Germans to pay for their crimes, and for him it was not like the Nazis were aliens from a different planet. They were just Germans.” He added: “I remember he was standing with us at a graveyard outside his birthplace, where his grandparents were buried in Lithuania, and he was asking, ‘What were they thinking before they were shot, what had they done to deserve this?’ At that moment I understood why he wanted to avenge them.”

Joseph Harmatz was born on January 23rd, 1925, in Rokiskis, Lithuania, the son of Avraham and Devora Harmatz. His father was in the wholesale food business and the family was well-to-do. After the Germans invaded and Jews were confined to a Vilnius ghetto, his father, unable to provide for the family, left a suicide note and disappeared. All four grandparents were murdered. So was Harmatz’s younger brother. His older brother was killed in combat. Only his mother survived. At 16, as a young communist, he joined the underground and smuggled partisans through the sewers to the forests so they could join a group of guerrilla fighters and saboteurs led by Abba Kovner. After the war, they reorganised as the Avengers. (Kovner became a prominent Israeli poet.)

Harmatz wrote about his experiences in From the Wings, a book published in English in 1998. By his account the plot to poison the SS prisoners had been sanctioned by Chaim Weizmann, the Zionist leader who would become the first president of Israel. Weizmann was not told about the scheme to poison the water supply, Harmatz wrote, but other Zionist leaders were, and it worried them; they feared it would jeopardise support for the proposed Jewish state. The plot was aborted when Kovner was arrested as he was returning to Europe with the poison, secreted in cans labelled condensed milk, by ship from the Middle East (compatriots dumped the cans overboard after he was apprehended).

Harmatz helped thousands of European and North African Jews reach Palestine. He settled in the new state of Israel in 1950 and married Gina Kirschenfeld. She died in 1987. Besides their son Ronel, who confirmed the death, he is survived by another son, Zvi, and three grandchildren.

Harmatz studied law and economics in Israel, became the manager of a French shipping company and was director general of World ORT, short for Organisation for Rehabilitation Through Training, a charity that runs vocational and technical schools.

“Our ultimate intention was to kill six million Germans, one for every Jew slaughtered by the Germans,” Harmatz told the Observer in 1998. “Would the British and Americans ever have bombed Dresden if the Germans had not bombed Coventry? It was revenge, quite simply. Were we not entitled to our revenge, too?” He continued: “And should I look to my conscience? Maybe I was a bastard. But there is no pardonnez-moi. There have never been any such feelings of conscience. So many other people should look to their consciences, not us.”

Should we hand over the deposit for a house before getting all the documents?
4

Is my husband racist? He says Black Lives Matter is irrelevant.
Real news has value SUBSCRIBE