When model Nicole Trunfino breastfed her son during a break in an Elle magazine photoshoot, the pairing was so good that it made the cover 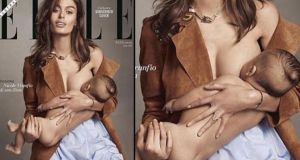 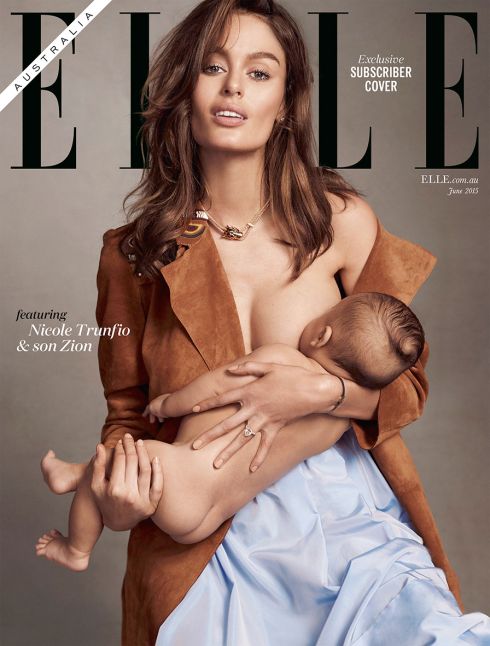 Trunfio was doing an ordinary modelling job for the magazine and happened to bring her baby along to the shoot . She was feeding the baby between shots when the photography team realised that this was the picture they wanted for the cover.

“This wasn’t a contrived situation: Zion needed a feed, Nicole gave it to him, and when we saw how beautiful they looked we simply moved her onto the set,” said Elle Australia’s editor-in-chief Justine Cullen in a post about the June issue. “It was a completely natural moment that resulted in a powerful picture.”

Trunfio’s in the sort of job where you can do that. Twenty-three years ago I quit my staff job at The Irish Times and went on contract so that I could breastfeed my three babies as I worked at home, that’s how much it meant to me. In a radio interview with the lovely Mike Murphy, I breastfed my baby, much to his surprise and to the joy of mothers listening from La Leche League who knew exactly what that contented little suckling sound was. If I could do it again I’d do it on TV.

At 40 per cent, Ireland has one of the lowest breastfeeding rates in the world, said the latest Growing Up in Ireland report. We need more positive images of breastfeeding mothers and babies. It’s not just women who need to see them, but men too, as well as all those prejudiced busybodies in public places who are somehow affronted to see an act that is natural and nurturing.

An EU report on childhood protection has criticised Irish maternity hospitals by promoting bottle feeding as the easier choice, so that only half of Irish women even try it. Breastmilk is such a miracle formula, that it prevents obesity and lessens the risk of Type 2 diabetes in later life for the baby. It also makes breastfed babies smarter – followed up to the age of 30 they have been proven to have higher IQs. It also protects the mother against some cancers.

The essentialness of breastmilk is now so well-known, that in the USA women sell their breast milk for $2.50 an ounce and in China, wealthy parents spend thousands a month on frozen breast milk.

Women from other EU countries are six times more likely to breastfeed than Irish women and Irish women wean babies too early, at around four months instead of six months. This has been suggested as a contributary factor in developing childhood obesity.

Mothers who have never breastfed before and have never even seen it done, but are trying to do so, need supports to continue breastfeeding. If that’s you, see breastfeeding.ie for HSE support groups in your area.

How to make Ireland’s best cheeseburger at home
8