An app that shows people with disabilities the way 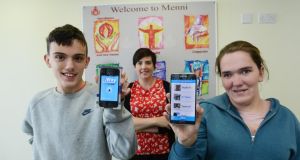 ‘I love trying to make things accessible,” Sarah Gavra Boland says. She’s sitting in an office in Tallaght surrounded by laptops, tablets and smartphones, some of which are hers and some of which belong to the young people with learning disabilities that she works with.

Boland (no relation) was one of the winners of last year’s Vodafone World of Difference competition. The competition supports social innovators to work on their ideas for one year – ideas that must focus on a charity that helps young people. The office Boland is sitting in is that of her chosen charity, St John of God Menni Services, which works with young people with intellectual disabilities.

Her idea was to develop an app that would help people such as those who use the Menni Services to travel independently and safely between locations. “Ten years ago, there wasn’t the technology to do this, but now there is,” she says.

The traditional way of helping people find their route includes using prompt photographs of landmarks along the way, which is both heavy on paper consumption and cumbersome. Boland’s app, Way Buddy, which she has continued to develop in the last year, combines a number of existing technologies.

“It’s about empowering people,” she says. “Maybe some people can’t tie a shoelace, but they can do this. We tried audio with Google Maps, but it didn’t work. It was too confusing. So it’s image-heavy and text-minimal now. Users take their own pictures of their route.”

Grant Brady (18) demonstrates how it works by using the Way Buddy app on his iPhone to guide us from the office to the nearest Luas stop, at Tallaght hospital. He has a few key routes programmed on his app, which take him from home to the centre and back again, and to town and back. We start at the front door of the building, which there is a picture of: this is the work-to-home route. As we pass pre-programmed landmarks, the pictures scroll on automatically. There is a picture of the traffic lights at which we cross, with a reminder and cue to wait for the green man.

Brady can see how many minutes it will be before the next Luas arrives, as the app links in to real-time updates from Dublin Bus and the Luas. For security, his mother and others who have access to his log-in and can see where he is at any point in his journey, because his location details are shared with them. If he goes 100m off-route in any direction, an alarm message is sent to those who have his details. We arrive at the Luas stop in jig time, and the tram arrives three minutes later, as Brady told me it would.

It takes an average of six months to learn a route, so, unlike his friend Lisa McEvoy (20), who also uses the Menni services, he does not yet travel alone; he will be shadowed on his journeys until he can manage them alone. McEvoy already knew four routes before she got Way Buddy on her phone, and can travel alone on them, but she wants to learn new routes, which the app is helping her with.

Way Buddy is still in development, so it’s not yet available on iTunes, but she hopes that will happen in due course.

There is an obvious potential pitfall to this technology: what about the risk of theft of smartphones from vulnerable people who are using them very publicly?

“Everyone asks that,” says Boland. “We’re insured. But the fact is, of the 10 phones we’ve been using in the pilot, only one is out of action, and that’s because it was dropped down a toilet by mistake, not stolen.”

There is dyslexia in Boland’s family, which prompted her interest in using technology to advance learning. When her younger brother was studying for his Leaving Cert several years ago, he was having particular difficulty with history. She recorded text for him in her own voice – other programmes use generic voices – and uploaded as many relevant visual cues for him as she could find from YouTube and other sources. Her brother got an A2 in his history exam and is now running a successful business in Australia.

Since becoming one of the winners for the Vodafone competition, Boland has been doing research to develop Way Buddy and ideas for other prototype apps. For several months, she has visited up to 14 centres a week that work with people who have learning disabilities, in order to find out what services people need and how best an app can deliver it. “Everything I’m doing is user-led,” she says.

She has also had to work with management at the centres, to persuade them of the benefits of supplying free wifi, in an effort to change the sometimes conservative thinking around the abilities of young people with learning difficulties and technology.

Since Boland has been working with Menni, she discovered that almost 80 per cent of the young people in the centres she has been visiting want to have a job. She has worked on a second project, Link2Me.ie, a website that showcases young people with learning difficulties who are seeking employment and which is updated by them. For this work, Boland has just received a LinkedIn innovation grant worth $10,000 (€11,200), to develop it further, as well as invaluable advice and endorsement by the world’s biggest online professional network.

Boland finishes up her year with Menni and the World of Difference competition in November, but she will continue to work in the area of app technology. She ends the interview by saying the same thing she said at the beginning: “I love trying to make things accessible.”

The closing date for the Vodafone World of Difference 2014 competition is September 8. It is seeking people to work with a charity of their choice on a project that supports people aged 16-24. The prize is a salary for one year and mentoring support. Details at vodafone.ie/foundation/world-of-difference

WORLD OF DIFFERENCE: OTHER 2013 WINNERS