Tesla ready for Irish sales – and Car of the Year

Firm has no plans for dealership in Ireland, but says it can cater for Irish buyers 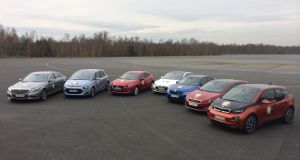 Magnificent seven: the finalists for the Car of the Year 2014

High-profile electric car firm Tesla sees no difficulty in catering to Irish customers, despite saying it has no plans to open an Irish dealership in the near future. According to a spokesman: “We have already sold cars to customers in Poland and Greece where we don’t have dealers yet, so selling to an Irish customer would not be a problem.”

Asked about servicing issues and repairs, Roberto Toro said: “Consider that 90 per cent of the problems or issues that would arise relating to this car can be sorted remotely through software updates or upgrades. In the other cases we provide a service cover everywhere in the world, so for example if you buy a car in Ireland and you have a problem we can’t manage to fix remotely, then we will come directly to the customer with all the parts needed to carry out any repairs.”

In the meantime, the firm is preparing for the launch of its Model X SUV next year. Built on the same platform as the Model S, it will feature a more advanced battery pack, offering even better range than the 300-400km on offer in the current car.

In recent weeks, Tesla has been the focus of speculation about a possible takeover by Apple after it emerged that the car firm had “conversations” with the tech giant. Chief executive Elon Musk confirmed last Thursday that the talks had taken place, but said it it is “very unlikely” that Tesla would be bought by any company.

Last week the Tesla Model S joined six other finalists in the last testing session for this year’s Car of the Year awards. After hundreds of hours of testing on everything from frozen Finnish lakes to sun-kissed dust tracks in southern Spain, the winner of Car of the Year 2014 will be announced next Monday afternoon.

From over 50 new cars launched onto the European market during the last 12 months, the jury (of which this writer is a member) has whittled down the list to seven finalists: BMW’s i3; Citroen C4 Picasso; the Mazda3; Mercedes S-Class; Peugeot 308; Skoda Octavia; and the Tesla Model S. It’s an eclectic mix of models this year, representing dynamic improvements, value propositions and real innovation in the motoring world.

A final testing session took place last week at the CERAM automotive test facility outside Paris. This is the last chance put the cars through their paces, raise questions and decide where we rank the finalists.

As part of the announcement next Monday, each jury member’s votes will be published, showing how they scored each of the finalists.