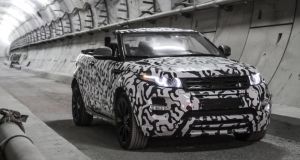 Land Rover announced the Evoque Convertible in the tunnels of London’s Cross-Rail project.

Land Rover tends not to do ’conventional’ car launches. For the launch of the original Range Rover Evoque, it proved that you can go off-roading in an urban environment by sending a troop of Evoques under the centre of Liverpool through a disused Victorian railway tunnel.

Four years on, for the offical announcement of the Range Rover Evoque Convertible (AKA; the car industry’s worst-kept secret) Land Rover has gone back undergound, driving a prototype soft-top Evoque through the almost 50km netowrk of tunnels that make up London’s ambitious, multi-billion-Pound Cross-Rail project.

Murray Dietsch, Director of Land Rover Programmes said: “The tunnels are still under construction, so we had a unique opportunity to explore the vehicle’s all-terrain ability in unchartered territory.”

Land Rover isn’t giving away any technical details of this, the first factory-built Land Rover convertible since the 2009 Defender SVX, but it will join the facelifted standard model (being unveiled at the Geneva motor show tomorrow) in using the new ’Ingenium’ petrol and diesel engines (which dramatically cut the Evoque’s Co2 emissions) and it will gain the same updated interior that uses Land Rover’s new InControl infotainment system.

While, oddly enough, hot countries such as those in the Middel East actualyl favour hard-top cars (it’s just too darned hot to get the top down apparently) Land Rover sees significant markets for a soft-top Evoque in the US, Asia and southern Europe.