Seat’s rival to the Juke and Captur will launch next year, based on the Ibiza 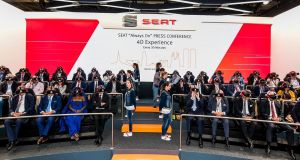 Seat, which is showing off its range-topping 4WD Ateca X-Perience SUV at the Paris motor show, has confirmed that the Ateca will get a smaller brother, called the Arona.

Based on the next-generation Ibiza hatchback (which we had thought might make an appearance in Paris but now seems slated for a debut in Geneva next year) the Arona is named for a city on the island of Tenerife and will go on sale late next year.

Seat President Luca de Meo explained that “the Leon, the Ibiza and the new Arona, together with the Ateca, are going to strengthen Seat from a commercial, financial and brand image standpoint. 2017 is going to be a very special year for Seat.” The Ateca has already been a success for Seat – launched in June, it already has 21,000 orders across Europe.

it looks as if Seat is also getting into the digital sales theatre. It’s stand in Paris features a small amphitheatre equipped with virtual reality goggles so that the press conference is ‘always on.’ Those goggle also include a car configurator for the Ateca which “uses BitBrain technology to customise the Ateca according to visitors’ emotions and neurological input.” A car specced by your own thoughts and emotions? Could make visits to the dealers a bit more exciting…

"The connected car at the core of the user experience is our vision of the future of mobility. We want to position the car as a service that offers a digital, connected experience,” said de Meo. “Bringing Seat to the next level means not only working hard to continue delivering even better products and services to our customer, but also using this revolution in the sector to play, this time, a front runner role in some of these new trends. We dream of making Seat the brand capable of delivering the easiest mobility experience in this fast changing environment.”