Michael Harding: I still have regrets about St Patrick’s Day 1976

I could have gone in and shared my flask of whiskey with him at the fire, but I didn’t 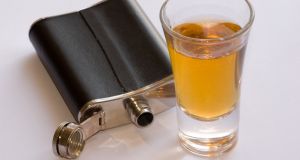 There was no parade in Glangevlin on St Patrick’s Day in 1976, but I had a flask of whiskey in my hip pocket and a commission to drive a musician to Blacklion around mid-morning. He was an elderly man who lived alone in a remote cottage.

He had a cat, a fiddle and an endless supply of cigarettes, and his lungs were destroyed.

“I can’t breathe at night,” he joked as I stepped into the dark kitchen.

I knew it was true because I often found him on a hard seat at the fire in the middle of the night with a blanket around him as he stared into the empty ashes.

When I was coming from the pub in Blacklion, I sometimes checked if his downstairs lights were on. If they were, I would venture in.

I drove him to the hospital once, and when he got back into my car afterwards he said: “They say if it doesn’t clear up they’ll have to drain it. Makes me sound like a field.”

After he got the inhalers he was as right as rain two mornings out of three. But if he took a notion to go looking for sheep on a cold day, I would find him in the afternoon struggling for every breath and, as he said himself, “drowning like a child”.

I took him to pubs, where all the other drinkers would listen with fascination to his whistling chest, if the television wasn’t on. There were no breathalysers to worry about back then.

He could barely breathe

On St Patrick’s Day 1976 he was dressed in a black suit, brown shirt and a psychedelic tie. The birds were singing and a few crocuses were up under the hedge outside his door. His fiddle lay on a kitchen chair. He had an appointment with a flute player from Kiltyclogher, Co Leitrim, he said, and he was hugely excited.

“He said he’d meet us in the Black,” he explained as he sat into my new orange Ford Escort. On the way to Blacklion, he could barely breathe.

“I’m fine,” he replied, “but this fella is an all-Ireland champion.”

We started in the Bush Bar. Vincent, a good-looking man my own age, was behind the counter and he put up two pints on the house, eyeing the fiddle, and we put the pints away, as they say, and sat watching the clock.

After a while we went down the street to Frank Maguire’s. But his friend didn’t appear there either, and so we headed past the army checkpoint and over the street to Dolan’s, a small grocery shop that also sold drink, but it was closed up for the day and my friend stood outside it wheezing and confused.

So off we went, walking across the bridge into Fermanagh, where the IRA used to fire mortars at the army barracks up the road in the middle of the night. We passed the old schoolhouse and the Spar shop and, farther up the street, we arrived at Leo McGovern’s pub, a dainty little lounge with a red carpet, which was uncommon at that time.

We sat there bewildered, and another customer remarked that we looked like men on a mission.

“We’re heading home,” the musician said. His little sprig of shamrock hung down from a pin on his lapel like an exhausted and ragged ballerina and his violin lay silent on the plush red couch beside him.

I spoke to the stranger at the bar about the weather and parades, and how there wasn’t as much fun as long ago, but the musician neither drank his pint nor spoke. I was half-finished mine when he whispered in my ear to take him home. And I did.

He left the car without farewell and hurried up his fuchsia lane, and I waited as he scrambled with the key and vanished into the dark.

I know that if I waited long enough I would have heard him play within – The Dark-Haired Girl, The Battering Ram and My Darling is Sleeping, which was his favourite. I could have gone in and shared my flask of whiskey with him at the fire, but I didn’t.

I felt at the time that it would have been too painful for him or me or both of us to admit defeat or embrace the solitude. But 40 years later, on St Patrick’s Day in 2016, I still regret that I drove away.