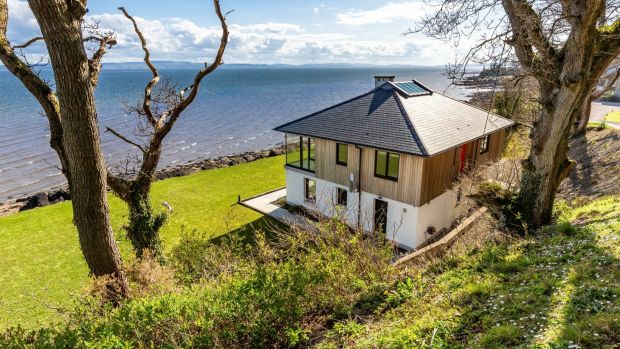 Beyond the village of Redcastle on the Inishowen peninsula, Ireland’s most northerly point, is a palatial pavilion set just above the water’s edge on the shore of Lough Foyle.

The slick, A3-rated new build, which was finished in 2018, has stellar views of one of Donegal’s most beautiful loughs.

Designed by Derry-based architect Caroline Dickson, the mother of modernism in the northwest, it was constructed with its own sea wall using locally sourced block armour, and has a specialised water treatment system installed that takes into consideration the fact that Lough Foyle is a salmon run. It also has geo-thermal heating in the form of underfloor heating across its two floors. Its Internorm windows are all triple-glazed, and set in anodised alu-clad frames that can stand up to the weathering of such a demanding maritime setting.

It’s an upside-down house, Dickson explains, with two of its four double bedrooms at ground-floor level where there is also a snug and a games room.

But it is the steel-frame pavilion with its vast expanses of glass on the first floor that will lure buyers in. This is accessed via a stairwell illuminated by a large skylight.

From a swivel chair in the sitting room, Moville-born racing-car driver Damien Faulkner likes to take up a pair of binoculars and drink in the views from Derry city to the south all the way north to Magilligan Point. From the balcony here, he has often surveyed the activity of the local seal colony. “You often see the baby seals splashing,” he says.  He’s also been known to swim at high tide but prefers to use jet skis and water skis. You could also kayak or paddle board from the front, where there is a small sandy stretch.

The kitchen is a sleek, German-engineered design by Pronorm, fitting of a petrolhead’s pad. He found it in Ballycastle Home Care, Co Antrim. The handleless design has near-indestructible Dekton countertops and deep drawers under the island where a stepped countertop forms a breakfast bar.

The plan had been to construct a large terrace off the kitchen, and while the sliding doors and structural elements are all in place, this has yet to be completed. A large-format, stone-look porcelain tile covers the two floors, sourced from McDaid’s Superstore in Buncrana.

The main bedroom is also at this level and has a sizeable en suite.