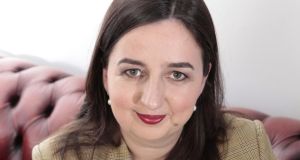 Erica Devine: ‘Avoid using picture lights over paintings, as they deliver a high dose of heat and light’ 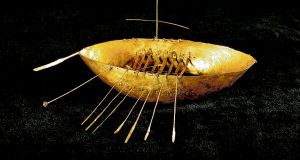 ‘An immortal object’: the gold model boat from the hoard of gold objects found at Broighter, Co. Derry, dating to the first century BC. Photograph: National Museum of Ireland

What is your area of expertise?

I advise museums and collectors on the care and display of their collections of art and antiques, train house staff, and design and install exhibitions.

What is your background?

I grew up in Dublin. I was a very lucky child, as at one stage we lived on the grounds of an ice-cream factory where my father was the refrigeration engineer and then he worked for Rowntree Macintosh; it’s no wonder I had quite a few fillings as a child.

Where do you live?

I’m about to move into a Victorian house near the seafront in Bray, Co Wicklow, and am enjoying using my full repertoire of conservation skills to decorate it with plasterwork, murals and gilding. The house had been subdivided into flats, so we undertook a complete restoration. Lots of original Victorian features were revealed, including an Arts & Craft cast-iron chimney piece that needed to be stripped of layers of paint. We also recast some of the original ceiling plastercast roses.

I’m putting in stained-glass windows with a Victorian palette of deep, luscious colours but with a modern design, made by Enda Hannon, a stained-glass maker in Francis Street. We have an exceptionally good German-trained Polish joiner, Richard Koziol, who is making bookshelves.

I have bought some Dutch embossed copper wall-mounted sconces (candle-holders), which reflect the glow of the light throughout the room.

I studied ancient history and archaeology with Russian at Trinity College Dublin and then decided to train in historic object conservation at Durham University in the north of England. After qualifying, I worked for the National Trust in the UK, then the National Museum of Ireland, and managed Arch Con archaeological conservation laboratories, before going freelance.

Memorable projects include preparing the jewelled Star of the Order of St Patrick for display at the banquet for Queen Elizabeth in Dublin Castle during her state visit to Ireland in 2011. Among other highlights were laying out the permanent exhibition at the Waterford Museum of Treasures and working on the Sam Maguire Cup for the GAA. Dressing the recently opened bedrooms at Malahide Castle was a particularly creative challenge.

However, I think, perhaps, driving around the beautiful counties of the west of England advising the National Trust property managers on the care of their collections was an unforgettable time.

Have a conservator visit you to advise on the safe display and care of your collection. Everything has to be cleaned, dusted or handled at some point and a well intentioned but a misinformed housekeeper can do untold damage, both aesthetic and financial. One tip is to avoid using boardroom style picture lights over paintings, as they deliver a high dose of light and heat. This creates a convection of air that deposits dust on the painting surface and causes cyclical swelling and contraction of the canvas, thereby weakening and potentially cracking the paint layer. Their corporate/war office look is also very unappealing.

I collect Japanese lacquerware. Lacquer is a type of resin – a plastic-like substance obtained from trees – which Japanese craftsmen use to coat metal, bamboo, leather and other material to make them waterproof, hard and lustrous. The effect enhances the aesthetic appeal of the objects. The lacquer can be carved and decorated with, for example, gold powder or sea-shells. The huge commitment of labour required in its creation, the glossy perfection of its surface and the exquisite beauty achieved with such brevity of artistic expression is wondrous.

An 18th-century Chippendale Chinoiserie gilt mirror. The depth , sparkle and ultimately the romance of the tin mercury mirror glass is unequalled by modern silvered mirrors.

What’s your favourite work of art, and why?

The 18cm (seven-inch) long, gold “Broighter Boat” (above) in the National Museum of Ireland. The boat was part of a hoard of gold objects from the first century BC that was discovered in the townland of Broighter, near Limavady – close to Lough Foyle, Co Derry – in 1896. Its immense antiquity and striking modernity of design confounds me each time I see it. And what transports it into the realm of the sublime is the fact that it is made of a noble metal that does not corrode – it is effectively immortal, if one can say that about an object.