Mementoes of past All-Ireland hurling finals 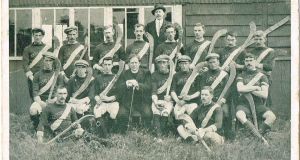 Postcard from a selection of rare, early 20th-century postcards from Kilkenny (€200-€300). It features the Kilkenny team that won the 1907 All-Ireland final.

Tipperary beat Kilkenny by a single point (1-9 to 1-8) to win the 1950 All-Ireland hurling final. A copy of the match programme is among the GAA lots in the sporting memorabilia section of Whyte’s auction in Dublin on September 20th.

A selection of rare, early 20th-century postcards from Kilkenny (€200-€300) includes one featuring the Kilkenny team that won the 1907 All-Ireland final. It was held, not in Dublin, but at Fraher Field, Dungarvan, Co Waterford. In those days, club teams represented the counties: Kilkenny was represented by the club side from Mooncoin who defeated the Cork team (the Dungourney club) in a score-line of 3-12 to 4-8.

A fascinating item of 1950s advertising memorabilia is a John Player’s cigarettes ornament featuring a Waterford hurler and a Cork footballer with the slogan: “On all grounds – Player’s Please”. It is estimated at €200-€250. These figures were once a familiar sight in bars throughout Ireland.

Auctioneer Ian Whyte said, “GAA memorabilia, until a few decades ago was regarded as having no value, now it is increasingly collectable”. He added that “items such as match programmes which 30 years ago, when nobody was collecting, were changing hands for as little as 50p can now fetch hundreds of euro”.

Among the most sought-after items are All-Ireland medals and match programmes.

He said most collectors of GAA memorabilia were Ireland-based but some were Irish emigrants in locations including New York and Abu-Dhabi.

In July this year, the 1955 All-Ireland hurling final medal won by the late Nickey Rackard of Wexford was sold for €17,500. The estimate was just €5,000-€7,000. It was sold by Fonsie Mealy Auctioneers and is one of the highest prices ever achieved for an item of GAA memorabilia at auction.

Lots of interest include the jersey worn by Paul McGrath at his 1998 testimonial in Lansdowne Road. It will go under the hammer with an estimate of €400-€600.

A highlight for a true fan – or perhaps a dedicated autograph hunter – is a collection of 17 jerseys worn during Denis Irwin’s testimonial match in August 2000.

‘At what point is it okay for a black person to be Irish?’
Real news has value SUBSCRIBE