Cashing in on 1916 memorabilia 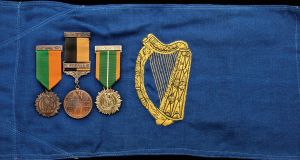 Medals awarded to Seán T O’Kelly, one of the Volunteers who was in the GPO and who later became the second president of Ireland, will be auctioned in New York next Thursday, with an estimate of $12,000-$15,000

Cometh the hour, cometh the auctioneer. After much anticipation, collectors of 1916 Rising memorabilia will discover the real value of their mementoes in the months ahead. Dates have been announced for three major history auctions in Dublin. The first, at Whyte’s in Molesworth Street, is on Sunday, March 13th, followed by an auction at Adam’s in St Stephen’s Green on Tuesday, April 19th. And finally, Fonsie Mealy Auctioneers will hold their sale in the Gresham Hotel on O’Connell Street – opposite the GPO and chosen specially for the occasion – on Saturday, April 23rd, the eve of the centenary of the Rising, which began on April 24th, 1916.

All three auction houses are still accepting consignments – and while the emphasis is on items relating to the Rising, the sales will also include historical memorabilia from all eras. The auctioneers have already said that they are getting in some very interesting consignments and the consensus is that for anyone planning to sell 1916 items, this year – with interest at an all-time high – is the moment.

Most copies of the Proclamation were destroyed during the Rising. Of the estimated 1,000 copies of the document printed, about 50 have survived. Of these, 25 are in museums and public collections, and the remaining 25 are in private hands. About half a dozen have appeared at auction in the past decade and while the price can depend on quality and provenance the average price had dropped to “about €100,000”.

Before the Dublin auctions, however, the first 1916-related auction takes place in New York on Thursday when the medals specialist Spink Auctioneers will offer some 70 lots from the “Liberty Collection” of medals, historical documents, uniforms and other artefacts relating to the 1916 Easter Rising and the War of Independence – and includes items from both sides in the conflict.

Among those on the British side involved in the Rising were Maj Gen William Lowe, 7th Dragoon Guards, who accepted the unconditional surrender of Patrick Pearse and whose medals and honours including a silver breast badge for “The Most Honourable Order of the Bath, Military Division” are estimated at $15,000-$20,000.

For further information, and to view an online catalogue, see spink.com.