Women should have babies younger? Hang on, it's not that simple

There is an optimal biological window for procreation and a pragmatic time to begin parenting. But not all of us are able to jam into the space where the two overlap 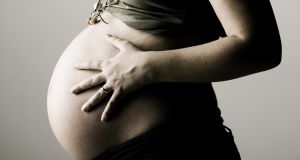 Pregnancy: we should ask why Irish women feel unable to have children earlier. Photograph: jupiterimages.com

On Monday, an Irish Times article headlined Irish women advised to start having babies younger elicited an uncommonly passionate response from readers. In it, Dr Simon Fishel of the Beacon Care IVF Fertility Clinic in Dublin warned of the higher risk of chromosomal disorders in babies born to older mothers and said that, unless action was taken, the slowing birth rate would become a social issue when it led to population decline.

According to Dr Fishel, Down syndrome occurred at a rate of one in 700 pregnancies among women having children at 32 years old; this jumped to one in 67 when the women were 42 years old.

Biology cannot be argued with, but as a woman in the age bracket being whooshed into procreation, I’m tired of being told how to live on the basis of it. Judging by the reaction to the article of female Irish Times readers, I’m not alone.

According to statistics relating to the EU, Irish women are having their first child in their 30s, rather than in their 20s like other European women, and we are also above the average for first-time mothers aged over 40.

The reminder to hurry into procreation elicited an impatient reaction from Irish women. Perhaps they’ve exhausted their patience on what they see as the very necessary wait until their mid-30s to have children.

Although Dr Fishel’s advice comes from a biological perspective, and we accept the facts about fertility, I find being advised to hup to and get knocked up irritating. Irish women often aren’t waiting by choice. Biology is merciless, but so too is the plight of a young mother raising children without any money.

During their optimal window of fertility, Irish women are often busy pursuing an education and trying, like all young people, to push their way into a career.

Taking one to four years off to have children is often a death blow to that career: while male colleagues are working their way up the ladder, we are at home singing nursery rhymes and literally crying over spilt milk.

Women can do that, or they can wait until they are established in a job before taking the time to have a baby. If they want a career, they are trapped in a Hobson’s choice.

And the men? Well, most Irish men don’t want to become parents in their 20s. They, too, are under the same career pressures, but they don’t have to accept the added biological risks if they put off fatherhood until their mid-30s. They can comfortably delay without an opportunity cost.

In 2014 two-thirds of babies were born to married parents and the average bridegroom was aged 36. So women wait.

As for single mothers, Irish society tends to eye them with suspicion and does not acknowledge them as making a contribution. Having been raised by a single mother, I have no problem admitting that children from two-parent homes simply do better on average and usually have less of a struggle to succeed in life.

We do indeed risk medical complications, such as Down syndrome, by having children later, but many would choose to become parents younger if circumstances permitted.

However, no potential parent will have children simply to bolster population numbers. Prenatal testing for serious disorders is available. Perhaps if access to abortion were more available, the heightened risks associated with mothers over 35 would be less of an obstacle.

Dr Fishel says that we need 2.6 children per woman on average for population replacement, and that we are only having 1.9. This may be the case, but it has a whiff of old Ireland about it, where we are told to have the babies whether we can care for them or not.

We may need young people, but we need good, motivated, well-adjusted young people. Attentive, caring parents are needed to mould good citizens. We have an ageing population that will need a younger workforce to maintain it, but one might think that we didn’t live on an overpopulated globe with large numbers of young people perfectly willing to travel for work on the promise of a better life. We could also do a lot more to make Ireland an attractive place for young Irish people to live in. Many of our brightest left in huge numbers over the past decade, and are having families abroad.

Could it be that Irish citizens are finding this country unconducive to having children younger? That financial instability, high property and childcare prices, poor prenatal care and an almost total lack of access to abortion services when needed might be affecting women’s decisions on becoming pregnant in Ireland?

It seems inherently illogical to produce statistics about pregnancy that compare countries with access to abortion to countries without. It is difficult to anticipate how this skews figures in actuality.

Though there are certainly infinitely worse places in the world to be female, Ireland has never been particularly kind or accommodating toward women.

Rather than instructing us to get on with making babies, perhaps we should collectively question why rates have dropped, and why Irish women are choosing to have children later. Those who wish to give birth younger might do so if Ireland were a good place to be a younger mother.