Criticised for looking bored on their visits to a library and a lake this week, Malia and Sasha Obama were just being teenagers 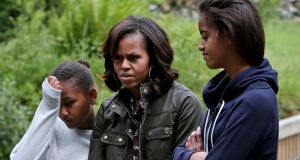 Can we go now?: Sasha and Malia Obama, with their mother, Michelle, fight off boredom and midges at Glendalough this week. Photograph: Julien Behal/PA

‘Oh man, we have to have lunch with Bono again!” The anchorman on Good Morning America is one smart guy: rapier-sharp wit, sculpted locks and shiny eyes that can roll backwards in mock horror. He fairly well eviscerated the Obama girls, 14-year-old Malia and 12-year-old Sasha, for their apparent display of boredom during the family’s visit to our shores.

Well, he didn’t actually; he made a lame attempt to impersonate a bored teenager. His imagined line about Bono came at the end of an innocuous report focusing on Michelle Obama and her daughters’ tours of Trinity College Dublin and Glendalough, in Co Wicklow.

The report included a series of images that showed the girls having the temerity to look like ordinary, occasionally sullen teenagers rather than a couple of Shirley Temples with plaster smiles and an agent for every ringlet.

Monastic settlements and dusty archives are unlikely to light many pubescent fires, whether the hard-pressed US taxpayer is footing the bill or not, and it’s probably fair to assume that trailing around after famous parents in the glare of the media is tedious enough without the added joy of watching dust particles dance in shafts of sunlight at an ancient library and listening to the enthusiasms of a bespectacled academic. It’s cheap to accuse those teenagers of boredom when all they displayed was a refreshing lack of affectation. They seem like demonstrative children: they slouch around in big sweaters and eat their own cuffs.

Give them a break. You can’t climb a family tree. You can skim stones on a lake, though, which was what they did when the history lesson in Co Wicklow was over. And I’m sure the fish and chips in Dalkey were most welcome, even if the vinegar had to be shared with an ageing rock star.

Anyone casting aspersions on the behaviour of the Obama brood has obviously never travelled with teenagers. They certainly haven’t travelled in a six-berth carriage on a sleeper train out of Paris with two male offspring who simultaneously decide to cultivate the art of farting at will. I’d like to take this opportunity to apologise to those two Danes with cushion-sole socks, prudent sandals and sensible haircuts.

There are lots of trips on offer for people who fear holidays with their adolescents – who fear the acres of silence, the caustic eyebrow, the stubborn refusal to co-operate until you dangle food in front of them.

Travel websites are full of helpful suggestions that make one chortle up one’s remortgaged sleeve: cycling in Bangkok, birdwatching in Madagascar, film-making in Alaska. Or how about New York, where, apparently, no teenager will be able to resist the allure of all that cut-price gadgetry?

And if you’re really in big trouble and can’t crack open your glowering teen with a prawn piri-piri or unlimited phone credit, you can always them to a bank-breaking Australian boot camp in the outback.

When I was growing up nobody ever went anywhere. No one on my street knew what delights lay west of Kinnegad, let alone the smell of a Parisian morning or the shriek of a churros seller in the early-morning Madrid streets.

Occasionally some freckled child would be borne off to New Jersey by an aunt in a polyester polo neck, but, by and large, none of us had any expectations that summer would offer anything more than bruised knees, a Golly bar and a go on someone else’s Raleigh bike.

Psychologists recommend communication when it comes to vacationing with teens and encourage you to involve your child in decision-making and planning.

I have a less sophisticated strategy. You’ve got to lower their expectations: the demands of hot buses, heavy backpacks, scuzz-bucket accommodation and ancient home-made sandwiches are great for keeping ennui at bay. Two weeks of that carry-on, and fish and chips in Dalkey would have them weeping with gratitude.


Teenage holidays: Recipe for succcess
John Sharry, psychologist, ‘Irish Times’ columnist and director of the Parents Plus charity, says: “How do you have a successful holiday with a teenager? It depends on their age. Older teenagers are more independent and may be going on their own holidays. But younger teens have to be treated differently from children.

“Regardless of the children’s age, realise that they are going through a transition. The main strategy is to involve them as much as possible. Making them part of the choice and planning of the holiday will motivate them to enjoy it.

“Getting that right involves lots of conversation and negotiation. Try to match their level of input to their development stage, and also match what parents and teenagers, and perhaps other children, want and expect from a holiday. It should be possible to devise a break that has something for everybody.

“There’s no simple formula. Some teenagers are sporty, others might be into acting or enjoy sightseeing. Some prefer lots of activity and others want to just hang out. Some want a holiday with a social thing, where they can meet people their own age. So you could arrange to meet friends on holiday, or visit a campsite or holiday village, for example.

“It may be an opportunity to loosen the usual rules, try out new things and offer freedoms in an environment you consider safe. Things like alcohol come down very much to personal choice, but the parents of older teenagers may permit their children to join them for a drink, for example.

“In relation to money it’s probably ideal that they have some level of autonomy rather than being given money on demand. They will put greater value on money they have saved themselves from pocket money or a part-time job. These things all increase their level of emotional investment in the holiday.

“Giving them lots of input is the basis of success. Expect that this is going to be more difficult to arrange than those holidays when they were younger that were all planned by the parents.

“These holidays matter. It might be one of your last opportunities to go on an enjoyable break with your offspring. If you’re lucky you will connect with and get to know your teenagers. Just don’t try too hard.”