Baby slings and colic: ‘It saved us’ 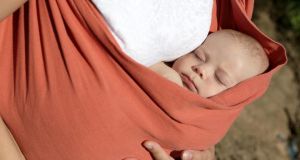 Rachel Kertis, a frequenter of Babywearing meet-ups in Galway, says her daughter Esme ‘would cry a lot more if she wasn’t in the sling. When I pick her up and put her in she calms right down’

“Having a sling changed our lives,” says Olwen Rowe of the breakthrough discovery she made on her second, “very colicky”, baby.

He had needed lots of time in her arms and her initial attempts to use a sling instead didn’t solve anything because she didn’t have anybody to show her how to use it properly.

“When I did find something that worked when he was four months old, it just changed everything. He was out of the classic newborn period but his crying extended beyond the three months.”

Now a mother of three children, aged 11, eight and five, she is a sling librarian in Galway for Babywearing Ireland and organises monthly meet-ups.

There is such a variety of slings and carriers on the market, “you can really be bamboozled by the choice, so to have someone to guide you through that can really help”.

Babies in non-Western cultures tend to cry significantly less and there is plenty of research to suggest that this is because they are carried more. But it is not just a matter of putting a baby in the sling and everything will be all right, Rowe explains

“It is part of the caretaking package. It is really about responsive care in the early months, so that the baby feels secure and attached. A sling can really help you with that because you keep the baby close and you can see the early signals, respond quickly.” Crying is the last stage of communication.

As for her own unsettled baby, she can say in hindsight “quite definitively, that it was a digestive issue and a sensory processing issue”.

Rachel Kertis thought for a while that her youngest child Esme, who is just three months old, had colic. But it turned out that she had tongue tie, which has been sorted, and she was also inclined to take in a lot of air when breastfeeding.

A frequenter of Babywearing meet-ups in Galway, she has found a sling has a really soothing effect on her daughter. “She would cry a lot more if she wasn’t in the sling. When I pick her up and put her in she calms right down.”

Kertis had tried carrying on her first baby Elliot, now aged six, but didn’t find it comfortable. However she carried her second daughter, Audrey, now aged three, a lot from birth but only after a lot of frustration trying to figure out slings.

“Once I got it, I got it” – and with that knowledge and experience it was so much easier with the latest arrival.

“Esme lives in the ring sling – it keeps her close to me and so her needs are met, which are very basic, while I get on with things for the other girls,” Kertis adds. “She loves it and is a very happy baby.”