New Year’s resolutions are like babies – fun to make, difficult to maintain

Oh no – 88 per cent of those who set New Year resolutions fail! 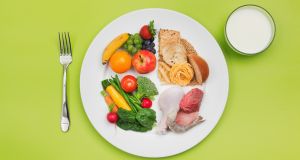 Here’s a small goal tip that might work for weight loss: reduce the size of your dinner plate

“A New Year’s resolution is something that goes in one year and out the other.”

“Many people look forward to the New Year for a new start on old habits.”

“New Year’s resolutions are a bit like babies: They’re fun to make but extremely difficult to maintain.”

A few days into the New Year, how are your 2017 health resolutions going? As the anonymous quotes above suggest, maintaining resolutions can be quite a challenge.

A 2007 study from the University of Bristol showed that 88 per cent of those who set New Year resolutions fail even though 52 per cent of participants were confident of success when they started. Each January, about one in three of us resolve to better ourselves in some way. A much smaller percentage of people actually make good on those resolutions. Research from 2002 suggests about 75 per cent of us stick to our goals for at least a week; however less than half are still on target six months later.

One way to increase your odds of success is to aim for small measurable goals. So instead of resolving to “lose weight”, deciding from the outset to lose one pound a week works well for men; while women succeed more when they make their goals public and ask for support from their friends.

Here’s a small goal tip that might work for weight loss: reduce the size of your dinner plate. Then fill half the plate with vegetables, with a quarter of the space given to protein and the same for carbohydrate. And put the food dishes out of sight away from the table when everyone has been served. This will stop any tendency to graze after you have finished the original portions.

Having difficulty with the notion of a full on exercise regime? Then try this: for every hour you are sitting get up and walk briskly for five minutes. If you are in a sedentary job for eight hours this equates to 40 minutes of exercise a day, taken in small bite size chunks.

One strategy not to follow is to rely on a medical “check-up” to kick-start your resolutions. According to a review in the British Medical Journal, general health checks did not reduce morbidity or mortality. Nor do they affect either deaths or disability from cardiovascular disease or from cancer. Worse, health checks increase the number of new diagnoses for patients, suggesting the possibility they may contribute to harmful outcomes such as over-diagnosis and over-treatment.

One trial found that health checks led to a 20 per cent increase in the total number of new diagnoses per participant over six years compared with the control group and an increased number of people with self-reported chronic conditions. Keeping the doctor away has definite benefits, it seems.

You could of course turn the resolution pressure completely on its head and decide to stop worrying about your health. It’s an approach advocated by Dr Susan Love, a professor of surgery at the University of California, Los Angeles.

Co-author of Live a Little! Breaking the Rules Won’t Break Your Health, Love makes the case that perfect health is a myth and that most of us are living healthier lives than we realise. “Is the goal to live forever?” she asks. “I would contend it’s not. It’s to live as long as you can with the best quality of life you can.”

Her thesis is based on the U-shaped curve. Rather than aiming for perfection at one or other end of the curve, maybe the best place to be is in the middle. There is solid evidence that those who have a slightly elevated BMI have better long-term health outcomes than people with low/normal measurements.

Don’t let the New Year resolution zeitgeist get you down. Here’s to a healthy and happy 2017 – whatever way it works for you.