Loneliness of the long-distance runner is a myth

With the help of running, the lid on my cancer treatment plan remains sealed 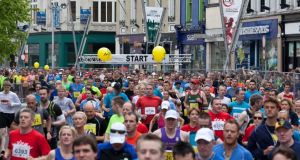 “I will join my daughter on the line in Cork, both of us with missions in mind.” Photograph: Clare Keogh

I am running the Cork City Marathon on Sunday, June 2nd. My opening sentence may not seem highly significant as it can be shared with the thousands of other entrants on the starting line in Patrick Street at 8.30am that morning.

It is not my first marathon. I have run 16 since I started road racing with Midleton AC 15 years ago. I am not going to win it unless I find myself stapled to an elite runner. Neither am I going to run dressed as Fr Matthew or soloing a sliotar blindfolded with Sean Óg Ó hAilpín riding piggyback.

So why am I writing this?

Why does this marathon mean so much to me?

Is it not just another race?

When filling out the application form, one of the compulsory boxes asks for your age on the day of the race. I typed 59 knowing that this would be the very last day I could do so. I will be 60 on June 3rd. This is a race I simply have to run, not only for the serendipity of its timing, but also to prove that for some of us running plays a far more significant role than entering marathons.

It is over two years now since I added Non-Hodgkin’s Lymphoma to my CV as a work in progress. Thankfully, its progress is working slowly. The writing on the tin of my treatment plan states simply “Wait and See”. I have had a lumpy bit removed from my groin. Subsequent scans and bone marrow tests have diagnosed a stage four cancer. But I do not feel ill. When more serious symptoms develop, as in significant weight loss, nights sweats, fatigue and more lumpy bits, I might not feel so good. It will be then that my oncologist, Dr Bird, and his team in the Bon Secours will prize open the chemo tin. Until then, Dr Bird?

He never actually said that. I paraphrase. He is far too professional to be so impolite. Besides I am at least 20 years his senior and dropped “fat” from my list of self-adjectives not long after I added “runner”.

Eamon Dunphy might describe me as a “good runner” but not a “great runner”. Steve Cram commentating on the London Marathon a number of years ago described those going over the line in under 3 hours 30 minutes as “pretty decent club runners”.

Sometimes running “good” or “decent” is important to me. While the dust continues to accumulate on my now historical PB collection, disappointment still kicks in if my 5k goes over 22 minutes or my marathon is nearer to four hours than three. Like all runners I set time targets. Every time we stand on a start line we imagine red numbers on the clock at the finish. And we expect. Pride is a drug we ongoingly carry.

I ran Rotterdam six years ago. After the 41k mark I had not only hit the wall I was battering it with a sledge hammer. I had walked the previous three or four kilometres and was now considering a humiliating crawl to the finish. Ahead I could hear the crowds as they thickened at the finish line. Suddenly there was a chorus of “Go! Go! Go!”. They could not be possible cheering me on? I was right. (The Dutch are so fickle.)

The roar rose for a very tall and fit but one-legged New Zealander as he ran past me. His long left-foot-to-right-blade strides condemned me to his wake. Suddenly with Chariots of Fire zeal I gave him all the two-footedness strength I could muster and pipped him at the line. Pretty decently we both finished under four hours with a minute or two to spare, although Steve Cram would be forgiven for agreeing with Eamon that I was not a “great runner” that day.

Running, however, is far more important than the time it takes to get from point A to point B as quickly as possible. To me running has a metaphorical essence. Running is my Big Brother. Running is that guy who relieves the anxiety, parks the stress, and lifts you from the world of the mundane while placing a strong brotherly embrace on your forward propelling shoulders. The loneliness of the long-distance runner is a myth.

Hours spent pounding the road is my therapy. Problems seem to lose their intensity to the pitter-patter of my running shoes. Logic takes direction from the rhythm of my strides and points to obvious solutions my sedentary life can miss. As Chris MacDougal says in the sublime Born to Run, “If you don’t have answers to your problems after a four-hour run, you ain’t getting them!”

And there are the ritualistic long club runs every Saturday morning. As Midleton sleeps, we take to the longer routes around the town and its hinterland. Here our therapeutic thoughts find voice as darkness moves into light. We high vis-wearing, lycra-clad philosophers articulate the meaning of life on the backroads of Carrigtwohill, Cobh and Castlemartyr. At the final water-stop we adjourn the philosophy for another week and return to the real world which seem brighter and more optimistic. Simply because it is.

With the help of running, the lid on my treatment plan remains sealed. At my last consultation with Dr Bird, all was white-cell well and I was “good to go” until we meet again in a few months. So I will join my daughter on the line in Cork, both of us with missions in mind. Sinéad wants a PB. If she follows Dean Karnazes advice (Puff chest out . . . one leg in front of the other . . . finish line), she will succeed.

For 42 kilometres I will run as if I am that two-faced Janus in June, looking back on my fabulous 50s and looking forward to my swinging 60s.