Hailstones, Elvis and a proper dinner for AP McCoy feature in the opening day 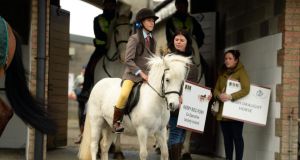 The hailstones were doing a merry dance on the bare toes and sparkly Louboutin shoes of model Rosanna Davison.

“It’s mind over matter,” she said, smiling through the Arctic conditions.

The former Miss World was at the opening day of the Punchestown Festival to judge the best dressed woman competition. The rain and biting wind were peppered with only an occasional surprise burst of sunshine, but that didn’t deter the hardy women who bared shoulders, knees and toes in an effort to catch the judges’ eyes.

Kirsty Farrell from Newry held on to her hat and won. The 19-year-old had a secret weapon. She was wearing leggings under her voluminous skirts.

RTÉ’s Miriam O’Callaghan was resplendent in a white ensemble, topped by a navy hat borrowed from a colleague as they travelled to the racecourse. “That’s how much planning goes into my wardrobe,” she said.

It was a happy day for Milly Fortune (10), from Gorey, who rode Sparkles, her Kerry Bog pony, in the equestrian parade before the races started. There are only 450 Kerry Bog ponies in the world, explained her mother, Yasmin. “They reckon they’ve been here since the Vikings.”

Ruby Walsh presented him with a basket of gardening and cooking goodies on behalf of the jockeys. “Well, I’ve never done either before,” McCoy said of the gift. “I’d say the gardening has a better chance than the cooking has.”

McCoy later met Taoiseach Enda Kenny. “He’s a legend, a real legend,” Mr Kenny said of the jockey. Asked if he had placed any bets, the Taoiseach said he hadn’t had time: “I just came here from the Dáil and the spring statement, so maybe I feel lucky,” he said.

And would he place a flutter on the marriage equality referendum? “I never bet really on a referendum like that, but I hope the people give it a huge endorsement by voting Yes on the 22nd of May. It is all about equality.”

The opening day of the five-day festival broke the record for first day attendance, with 20,214 people filing through the gates. They included a man in a bright blue suit covered in orange fish, and a white-suited Elvis lookalike. After Enda, Elvis and a frozen Miss World, the rest of the week will have a lot to live up to.