Since the State bailed on a national diaspora centre, Neville Isdell has pumped millions of his own money into creating the ultimate interactive visitor experience in Dublin

Epic Ireland, a new “interactive visitor experience” in the CHQ building in Dublin's Docklands will tell the story of the Irish diaspora. 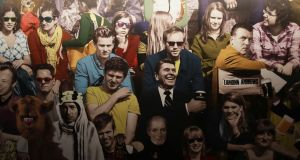 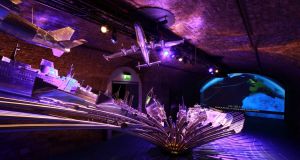 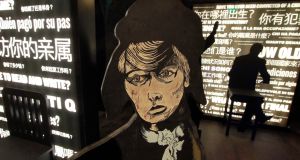 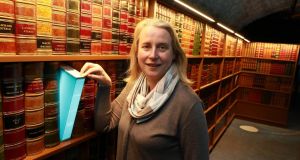 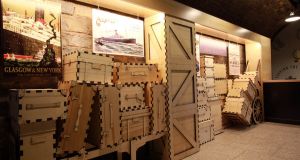 The Passport Office and beginning of the Epic Ireland experience. Photograph: Nick Bradshaw 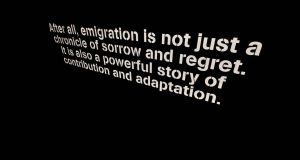 One in every six Irish-born people alive in the world today lives outside Ireland. It’s a staggering statistic, but in 1890 it was even higher: two in every five.

The Irish diaspora, one of the largest per capita in the world, is a story of adventure and desperation, success and survival.

Now, deep in the brick-lined vaults under the CHQ building in the Dublin docklands, a new “interactive visitor experience”, developed by the team behind Titanic Belfast, opens next weekend, to tell that “authentic and epic story of 10 million journeys, and the roots of 70 million people”.

Epic Ireland has been funded by a former Coca-Cola chief executive, Neville Isdell, who, after emigrating from Co Down with his parents to Northern Rhodesia (now Zambia) in the mid-1950s, has spent most of his life abroad.

Seeking an investment opportunity in 2011, Isdell spent €10 million on the CHQ centre at the heart of the International Financial Services Centre in Dublin. The 1820s warehouse on the north bank of the Liffey, converted by Dublin Docklands Authority into a shopping centre just before the economic crash, was only a quarter occupied when Isdell invested.

For the building to be a commercial success, the businessman knew, he needed a big attraction. So he came up with the idea of a museum “telling the story of all the successful Irish people and what they have achieved internationally”.

“I have experienced just how people abroad react favourably to you when you tell them you are Irish,” Isdell tells The Irish Times on a visit to Dublin. “They will tell you they have a relative here, or they want to visit Ireland. There is a specialness about Irishness. It is the friendliness and the storytelling and the enjoying life. I knew that was something to be celebrated.”

His big idea was conceived around the time the Government was tendering for a national diaspora centre, with €26 million tentatively promised. But despite receiving strong bids from eight consortiums around the country, including one from Isdell for the vaults under the CHQ, in February 2015 the Government axed its plans to support the project, saying that no capital funding was available.

Isdell was determined to proceed regardless, and since then he has pumped €12 million of his own money into the multimedia experience.

Epic Ireland’s 21 galleries will use actors and film footage to tell the story of 320 members of the Irish diaspora, 70 of whom are still living. The displays explore why people have left Ireland, the influence they have had abroad in the arts, science, education, sport and politics, and where the Irish are now and what they are doing “in today’s highly connected world”.

Also given a good plug are some of Ireland’s biggest brands and cultural exports, including Guinness, Riverdance and the old-fashioned Irish pub.

Each gallery has been designed with a different layout, with screens on the walls and floors and in audiovisual pods where visitors can swipe, click and touch to access information. The style is similar to Titanic Belfast, the award-winning, £100 million visitor experience also designed by Event Communications.

When The Irish Times visits in a hi-vis vest for a sneak preview, the screens and displays are still being installed. So we have to imagine holograms of immigration officers stepping out to greet visitors as they pass through virtual border controls, and “notorious rogues” such as Ned Kelly, Typhoid Mary and Billy the Kid coming forward to chat about how they achieved infamy.

Famous and less so

Although just a quarter of the profiles featured are female, those women who do make the cut have remarkable stories to share.

There’s the tale of investigative journalist Nellie Bly, born in Pennsylvania to Irish parents, who in 1885 was offered a job at the Pittsburgh Dispatch after writing a strong response to an article that called a working woman a monstrosity. Bly went undercover as a sweatshop labourer to expose the heart conditions caused by harsh working conditions, and as a psychiatric patient to get the inside story about the Blackwell Island institution in New York.

There is also the story of Dr James Barry, who as a British army surgeon in Africa undertook the first successful caesarean in the world where mother and baby survived. On his deathbed it was discovered Barry was in fact a woman, born Margaret Bulkley, in Dublin. Her mother had told her to disguise herself as a man before she moved abroad in order to practise medicine. Bulkley/Barry was the first qualified female British doctor or surgeon, preceding the next woman by more than half a century.

“There are a lot of stories of adventurers with limitless ambition, and people who have survived incredible adversity,” says Fiona Ross, Epic Ireland’s museum director.

Ross, who was brought on board two years ago, after two terms as head of the National Library of Ireland, says that they didn’t want to “Disneyfy the diaspora story, or fake it, or make it too light touch”.

A team of high-profile advisers have steered the project, including the former Labour minister for finance and education Ruairí Quinn; the broadcaster Mike Murphy; the Guinness Storehouse managing director Paul Carty; Catriona Crowe of the National Archives of Ireland; the tourism consultant Fiona O’Sullivan; the Eneclann genealogist Brian Donovan; and the Irish Voice publisher, Niall O’Dowd.

Epic Ireland claims to be the first digital-only museum in the world; its collection will be stored in the cloud rather than on shelves or behind glass. As part of the Diaspora Today section, blogs, tweets, social-media posts and emails will be collected from Irish people living abroad.

“We have emigrant letters written as far back as the 1700s sitting in shelves in the National Library on Kildare Street,” Ross says. Some of them have been digitised for exhibit in Epic, “but from this era, when people write emails instead of letters, we have nothing saved, nothing stored publicly. We have to do this to keep a record for the future.”

The museum opens at a time of surging interest in all things diaspora. A whole year was dedicated to diaspora tourism in 2013 with the Gathering. In 2014 the Government appointed its first minister for the diaspora (Jimmy Deenihan), and last year it published its first official diaspora policy.

The State has recognised the economic potential of connecting with successful Irish people abroad through initiatives such as the Global Irish Economic Forum and through small parish and local community projects.

At the end of the tour is a booth, operated by Eneclann, where visitors can research their own heritage and do an on-the-spot DNA test, to check their Irish lineage.

Tourism Ireland’s chief executive, Niall Gibbons, describes the opening as a hugely significant development for Dublin, at a time when the city is experiencing “its strongest tourism boom ever”. Ireland welcomed eight million overseas tourists last year, up 14 per cent on 2014. Numbers for this year so far are up a further 20 per cent. “We need to have new attractions coming on stream all the time,” Gibbons says.

Tickets will cost €16 for adults, which Ross says compares well with the Guinness Storehouse entry fee of €20. There are no free pints at the end, but you will receive a souvenir “passport” of your visit to take home.

As the late Brian Lenihan snr so notoriously said back in 1987, “We can’t all live on a small island.” And aren’t we all the better for it? The stories told at Epic Ireland highlight the way the Irish have achieved remarkable things when they have left the ould sod behind.