Why does your craft beer look like orange juice?

Beerista: A new wave of craft beers are intentionally hazy – but is it just another fad? 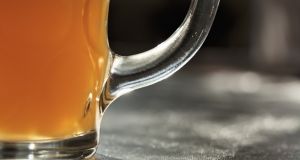 Cloudy just for the sake of it? The New England IPA

It’s not unusual for a pint of beer to look a bit like orange juice these days. Cloudy, hazy – or murky – beers are kind of cool at the moment. And you might even find a bit of sediment or a few flakes floating around in there too.

Haziness is a characteristic of certain styles like weissbeers, while bits of yeast can become disturbed in bottle conditioned beers if they’re shaken before pouring. But outside of that – and up until fairly recently – most beers have been clear.

But craft brewers, always tearing up the rulebook and looking for new ways to rebel, have decided that clarity in beer isn’t all it’s cracked up to be.

And along comes the New England IPA. This is a twist on the hoppy IPA style but with more emphasis on tropical juiciness and a creamy mouthfeel (as opposed to the dry, classic bitter traits of the IPA).

The big departure, however, is that the New England IPA is intentionally cloudy, which some say gives a softness to the mouthfeel. Or is it cloudy just for the sake of it?

Perhaps this is just craft beer doing its thing, always innovating and pushing the boundaries, but given the choice between a muddy blonde IPA and one with a lovely golden clarity, I think I know what I’d go for. It’s not all about looks, of course, but it certainly plays a big role in the drinking experience.

On the Irish market, Blacks of Kinsale has a New England IPA aptly titled Ace of Haze, while Trouble Brewing recently released their Fresh Prince of Kildare – and both are available now on draught.

There were a few titters when O’Hara’s – regarded as a bit old school by some in the craft scene – released their 51st State New England IPA.  This has a lovely citrus aroma and flavour, a delicate bitterness and is totally, brilliantly clear.