Too many farmers ‘afraid’ to go organic, says junior Minister 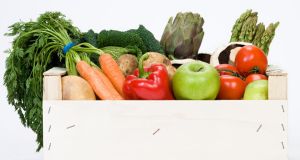 “There are too many landowners and people out there that are actually afraid of the organic sector,” Minister of State at the Department of Agriculture Tom Hayes said. File photograph: Image Source/Thinkstock/Getty

Too many farmers are afraid of converting to organic farming but are missing huge opportunities by avoiding it, Minister of State at the Department of Agriculture Tom Hayes said as the winners of the National Organic Awards were announced today.

He said he could not believe the demand for organic food when he visited Germany earlier this year. “Too often am I hearing of farmers around the country, particularly beef farmers along parts of the western shore, complain about making no money, and yes they are right when you look at their accounts,” he said.

But many of those people could easily adapt to organic farming because of the nature of their enterprise. “There are too many landowners and people out there that are actually afraid of the organic sector,” he said.

“I want to publicly say to many farmers around the country that find they are not making money...to look closely at the organic sector. There is potential there. The grant aid is there. The commitment is there.”

Mr Hayes said there were “huge” opportunities for the sector. “Ireland now has a great name right across the world, the cleanliness, the beautiful food, the environment that we are producing food in... I want, in the next 12 months, to drive this sector forward,” he said.

The Minister he would be announcing a new package of measures later this year to support the organic sector.

There are some 1,721 registered organic farmers in Ireland and retail sales of organic food are worth more than €99 million a year.

Some 110 organic products were entered in this year’s organic awards, but the big winner was brewmaster Laura Murphy, who founded Ireland’s first kombucha brewery, SynerChi, in Gweedore, Co Donegal. She won two of the six awards for her Kombucha Original Sencha Tea which the judges said gave the public a chance to purchase a “healthy alternative soft drink”. Other products recognised included micro broccoli, orange cherry tomatoes, mature cheddar and a vegetable box.

Meanwhile, Josef Finke won the inaugural Lifetime Achievement Award for his contribution to the organic sector. Mr Finke and his wife Marianne left Bad Kreuznach in Germany 31 years ago to establish one of the first commercial organic farms in Ireland, at Ballybrado, Cahir, Co Tipperary.

He was one of the first exporters of organic produce from Ireland and also founded Good Herdsmen in 1989 to co-ordinate the organic meat supply in Ireland. He was also involved in setting up the Irish Organic and Farmers Association and the Organic Trust.