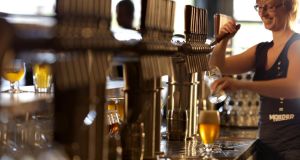 ‘Brewsters’ was the name for women making beer in the Middle Ages – it was only later, the story goes, that the word ‘brewer’ came into existence 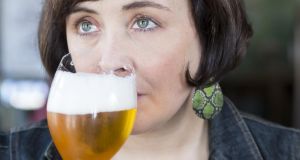 Brewing beer was a woman’s job back in the Middle Ages. It was just another household chore that you had to learn – and get right – or you could be in trouble. If someone didn’t like your beer or had a bit of hangover and started giving out about it, there were harsh consequences – you could be publicly tortured, maybe even burnt alive and forever branded a “beer witch”.

“Women’s role in the history of beer is often forgotten,” says Sofie Vanrafelghem, author and master beer sommelier. “One of the very first written documents to refer to beer,” she says, “was an ode written 3,800 years ago to the Sumerian goddess Ninkasi, whose priestesses brewed beer in her honour.”

“Brewsters” was the name for women making beer in the Middle Ages – it was only later, the story goes, that the word “brewer” came into existence when men started taking an interest in the production of beer and made it into a more commercial operation.

Vanrafelghem is at the forefront of a new women and beer campaign in Belgium, which is home to more than 173 breweries and some of the finest and most successful beers, from the delicious Duvel and Chimay, which is made by Trappist monks, to the ubiquitous Stella Artois.

The 125-year-old De Ryck brewery in the small Belgian village of Herzele marks an important milestone in Belgian brewing history. It was here that Ann De Ryck, whose great-grandfather founded the brewery in 1886, became Belgium’s first female brewing engineer. But she didn’t get there without a fight.

“I had a big clash with my father about it,” she says, pouring glasses of golden Arend Blond.

It’s 10am and we’re in the De Ryck tasting room, hop bines draped overhead, plates of “beer pâté” sandwiches on the tables and trays of freshly kegged beer being offered around. With lovely, frothy heads, they’re too good to say no to – even if it is a bit early.

De Ryck describes how she grew up helping out around the brewery, lifting bags of grain and stacking and cleaning bottles throughout her childhood. Her ambitions to become a brewer were initially frowned upon, but eventually she won out and took over the business.

The De Ryck brewery is now entering its fifth generation in the family, with Ann’s son and daughter recently joining the business. Though there is more modern equipment to the back, much about the De Ryck brewery remains the same, its old cobblestone courtyard, the centuries-old exposed brick buildings, big copper kettles and all its lovely old red signage still intact.

“Brewing is a passion for me,” De Ryck says, pouring more beer, this time the amber-coloured Arend Double.

In the small Flemish city of Mechelen, almost everything is connected to beer in some form or another. Many of the streets are named after former breweries.

Almost at every turn you’ll pass a canal, needed to supply water to the city’s many breweries, or old grain stores and ancient beer houses, some of which are now converted into slick modern hotels or apartments. And apart from the heavenly selection of beers you’ll find in the the canal side cafes and restaurants, you’ll come across beer in just about everything else too – from bread using spent grain, Saison cheese, beer jam, and even chocolates filled with a hop-infused brandy.

Het Anker is the last operational brewery in Mechelen city and is located in former beguinage buildings. In the Middle Ages these small non-monastic communities of women were self-sufficient, had their own bakeries, a hospital, church and, most interestingly, their own breweries.

The lack of potable water in those days meant most people drank a kind of light-alcohol beer, even children, and by brewing this safe drink the beguines were seen as doing their duty to society and did not have to pay taxes on their beer.

Charles V, the holy Roman Emperor, was said to particularly enjoy the beer from the beguines and was once famously quoted as saying “the daughter of the grain is superior to the blood of the grape”.

In 1872 the former hospital buildings of Mechelen’s beguinage were bought by the Van Breedam family, who set up a modern-day brewery.

Now in its fifth generation, the Het Anker family-run business has expanded over the years with a growing array of award-winning Gouden Carolus beers, a whiskey distillery, a hotel and a restaurant, where Vanrafelghem hosts regular workshops on the theme of women and beer.

“I used to be a white wine bitch,” Vanrafelghem says – with a smile – explaining that for a long time she never drank beer. “Many women don’t even consider drinking beer because they think it’s not feminine, has too many calories, and that it’ll give you a beer belly,” she says.

The female palate, however, is ideally suited to beer drinking because it is more sensitive and can pick up on its many hop flavours and aromas, she says. And as for calories, wine often has just as many as beer and, she adds, “one pina colada is equal to about seven Duvels”.

While it’s hard to believe that you’d want to drink anything but beer in Belgium, Vanrafelghem says beer is still generally regarded as a “man’s drink”.

But that is changing, she adds, particularly now that the craft beer movement has attracted more female drinkers with greater variety and bold new flavours.

The worldwide craft beer growth has had a knock-on effect in Belgium, with a renewed interest in its historic brewing culture and its age-old styles and recipes.

Vanrafelghem is also passionate about beer and food pairing. While she speaks, we are served a five-course traditional Belgian meal, each dish matched with a beer selected by Vanrafelghem. We sit at long wooden tables and the waiters come and go with soup, salmon tartare, Mechelen-cuckoo and large bottles of Gouden Carolus beers. We sip from delicate, gold-rimmed chalices, raising our glasses to the beer witches, the beguines and the brewsters of today. Sorcha Hamilton was a guest of Visit Flanders and flew to Brussels with Aer Lingus, aerlingus.com

Eat: Honoloeloe in Mechelen is a hip but relaxed restaurant great for beer and food pairings, with a super selection of beers from local microbreweries. honoloeloe.com

Stay: Het Anker hotel is a good spot for a fully immersive brewing holiday. Tour the brewery, eat in the restaurant, then wander the lovely cobbled streets of Mechelen city. hetanker.be/en/hotel

Visit: St Rumbold’s Tower in Mechelen. Climb its 538 winding steps – with a few stops on the way – and you’ll be rewarded with a truly spectacular view across the city. For more information see visitflanders.com