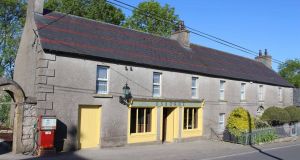 A flame of red hair flashes in the dark interior of Osborne’s at the foot of Mount Leinster. Catherine Tully is tending bar in this remarkable room where she joined Eric Osborne in 2015 to continue the story of this Victorian mountain establishment.
Eric’s grand aunt and uncle, Marie and Harry (brother and sister), spent their lives here, building an empire of sorts around them. The first cobblers, the first blacksmith, the first petrol pump. These businesses have crumbled but the bar and its place at the heart of Rathanna have maintained.
After Marie died, 37-year-old Eric would break from his life as an architect in London for the annual Pattern Mass in the village and dust off the bar and reopen for that one night of the year.
Growing up in a bar in Clonegal on the other side of the mountain meant he knew the business and the land it held well and the pull of home eventually got the better of him. It was the same pull that led him to Catherine, also from a well-known pub family, the Tully’s of Carlow. The synergy their upbringings create seems a near-perfect partnership to bring life back to this attractive pub.
The interior has been returned to its peak yet the passing of time is captured on every surface: the smoothing of the floor along the bar, the scratches on the bar top left by Marie Osborne’s Alsatian dog, the grooves in the dark wood where goods were laid down and wrapped, over and over, until a shadow of their story remained.
Next door, they’ve converted a storehouse into a 12-bed “luxury bunkhouse”, a perfect retreat for families and walkers. The old petrol pump still stands. A 100-year-old herd of cattle live wild on the farm. Life has never quite left this place but the ambition of this one couple are helping it flourish all over again.
Follow Barfly on Facebook