Pub perfection No 2: The view from its front door is beautiful and there’s always a great welcome inside 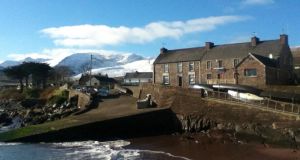 When friends came home from two weeks on Dingle Peninsula without seeing the Blaskets or driving Slea Head I couldn’t make sense of it – until they brought me to visit the pub where their time in the Kingdom was stolen: Nora Murphy’s on Brandon Pier, a place to rival any pub in Ireland. The view from its front door is beautiful and there’s always a great welcome inside.

It’s a stunning location. Settled on the edge of the Atlantic and in the shadow of Mount Brandon, Murphy’s looks across the bay at mountains and valleys. The pier is a hub for Brandon village: locals fish from its walls, teenagers launch themselves from its edge and the currachs stacked outside the pub are a busy local amenity. Sip your pint long enough and dolphins will cut across your view.

Run by the same family for five generations, Murphy’s is a living snapshot of Brandon. Thirty-one year-old Pádraig Murphy is now in charge, having taken on the mantle from his uncle, Paddy. Nora was his grandmother. He’s built a new deck and introduced a must-have crab sandwich.

Otherwise, he’s sticking with tradition. The fire burns, the walls feature newspaper cuttings and a stuffed salmon holds pride of place in the bar. There’s a dart board and a television for big games only and music is natural to the place, so come expecting a song. It’s simply a wonderful place to spend an afternoon.

The Wild Atlantic Way has taken a strange detour away from Brandon so Murphy’s is now officially off the beaten track, although it is a discovery point and a mere 40 minutes drive from Dingle town. Buck the trend and take the diversion. There’s a pint of Guinness and a crab sandwich waiting on the pier.