In our weekly fashion column, Deirdre McQuillan and Dominique McMullan round up this week’s news, style advice and more “It’s an easy tip to say but a hard one to actually live by: never be fearful of clothes. If you want to wear it, WEAR IT. Unless your outfit is physically harming others, there is no reason you shouldn’t wear that dress you have your eye on, the turban that makes you think “oh, I couldn’t” or those “crazy” shoes that you think will cause people to look and point. I think the world would be a much more fun place if we all dressed like everyone else was blind.” James Kavanagh

Women and their relationship with handbags, the link between fashion and the consumer is at the heart of an innovative fashion and multimedia collaboration called Pulling Strings which made its debut this week (18 February) in the Steambox Gallery in Thomas Street, Dublin 8. It’s the brainchild of Andrew Bell, an NCAD graduate who quit his job in Dunnes Stores to concentrate on this project which is a continuation of his degree collection. To do so he brought together a group of young Irish graduates with backgrounds in film, videography, furniture and industrial design, multimedia and sound alongside a small collection of clothes in red wool and silk displayed on plinths constructed by Paul Moran. The fashion video was shot and directed by Kate Dolan and Philip Blake. “The idea is to present a surreal and striking fashion statement” says Bell who raised the finance for the exhibition through a successful crowdfunding campaign. “Pulling Strings” runs until 22 February. 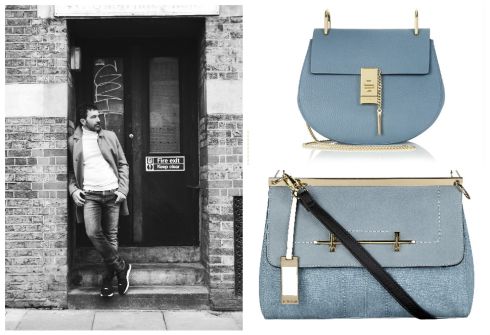 Denim is traditionally hard-wearing, long lasting, factory gear. That’s what makes these little denim handbags so glorious. Splurge for Chloé’s Small Drew Bag at €1,290 or save some pennies with River Island’s €37 version.

Celebrities giving their name to fashion brands is nothing new, but the case of Antonio Banderas is different. The acclaimed actor and star of Zorro actually took time out to study fashion in Central St Martins in London before approaching Bestseller in Denmark for his first venture into design and what he calls “a slow cook” project. “Sometimes I am obliged to walk a red carpet which requires a tuxedo and sometimes I want something comfortable such as jeans and a leather jacket and other days I am somewhere in the middle with a blazer and pair of chinos.”The result is an impressive collection that encompasses all these demands at affordable prices convincingly modelled by the man himself. Interested males will have to wait until August when it hits Selected in Dundrum and other Irish outlets at prices from 49.95 for shirts and knitwear up to 399 for a leather biker jacket.