What the Rose of Tralee means to me, as an emigrant and mother of a former Rose

Eibhlin Henggeler, who lost her daughter to a brain tumour two years after she was the Washington Rose, on the importance of the festival to the diaspora 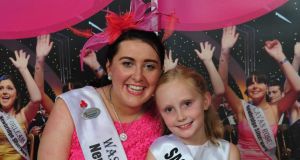 Eibhlin’s daughter Dorothy Moriarty Henggeler was the Washington Rose in 2011. 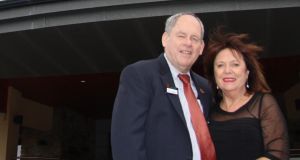 Dick and Eibhlin Henggeler outside the Fels Point Hotel in Tralee, which they purchased earlier this summer in memory of their late daughter Dorothy, who was the Washington Rose in 2011.

In June this year, Dick and Eibhlin Henggeler bought the Fels Point Hotel in Tralee in memory of their late daughter Dorothy, who was the 2011 Washington Rose. Last night, Eibhlin gave a moving speech at the inaugural International Women’s Business conference held in conjunction with the Rose of Tralee festival, telling her own emigration story, and describing what the festival means to her family and other members of the Irish diaspora.

According to my husband, Irish is not just my ethnicity, it is my religion. I was born in Killarney, one of 10 children. My mother died when I was 14 and I believe these two facts are the cornerstone of my life’s journey.

Like so many people of that time, we were poor but we didn’t know it. I loved Killarney, I loved Kerry and I loved Ireland. I had no childhood dream to ever emigrate, but I ended up in Texas in 1978 married to my pen pal Dick Henggeler.

As I saw it, I was not just a biological daughter, but a daughter of Mother Ireland with a moral responsibility to educate my children about my homeland 6,000 miles away and a lifestyle away.

In July of 1984 our son Franz and our daughter Treasa stood for a picture absolutely excitedly because they were coming to Ireland for their summer holidays with Mom and Dad, to be here for their uncle’s wedding.

Treasa suddenly got ill and two weeks later she died at Tralee General Hospital (with meningitis). She was two and a half.

Our second daughter Dorothy was born two years later in Harrogate, England. She brought new life, hope and healing into our grief-stricken hearts.

Returning to America, we were fortunate to be able to return to Ireland for our summer holidays every summer. Dorothy loved every minute of every part of it.

On May 3rd 2011, Dorothy was selected as the Rose of Washington DC. Her life and the lives of her Irish-extended families were changed forever.

This is Dot (Dorothy). If you want to know more about her, google Dorothy Moriarty Henggeler, Rose of Tralee 2011, and you will be pleasantly surprised.

She instantly became a sister to 31 other women, many of whose parents, and grandparents and great-grandparents had left Ireland with nothing more than a suitcase and their memories.

Many of these people took their proud Irish passion through generational oral and written family histories and poured their heritage into the bloodstreams of these remarkable young ambassadors to bring it all home to this incredible event called the Rose of Tralee.

You cannot witness this living history and not be touched by the fragrance they call the Rose of Tralee. Dick and I, as they say, drank the Kool Aid.

Dick and I were, from the beginning, absolutely positively interested in giving back to the great global family of the Rose of Tralee.

In October 2013, after a few weeks of dizziness, our beloved Dorothy, beautiful, joyful, now proud New Yorker and living her dream job with Tourism Ireland New York, was diagnosed with a brain tumour.

We could not have imagined more catastrophic news. The next five months would be the best and the worst of our lives.

The Rose of Tralee was a life changing time not just for Dorothy but for our entire family. It was the badge of honour that cemented our identity in a global Irish sisterhood.

We had no idea that Dorothy would be lining up the stars in a favourable direction in order for us to buy the Fels Point Hotel in June 2015, but it didn’t surprise us. With her vision, my passion and Dick’s money, we plan to take that place to new heights.

Our vision for the future is to rename it the Rose of Tralee hotel and with a permanent Dome, to attract more people and more businesses to Tralee. We are deeply humbled by the support of the people of Tralee and we hope to make them proud.