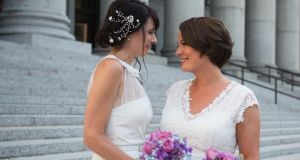 Ruth O’Farrell married her girlfriend Olena Ripnick in New York in May 2013.

When I struggled to come to terms with my sexuality in my 20s, one of the many things that upset me was the realisation that I could never have a family or a wedding. I was convinced Ireland was a country in which I could never live openly. I was terrified to tell family and friends and I was convinced all but my closest confidantes would reject me because of my perceived biological “perversion”. I was sickened and ashamed to be gay.

Around the time I was struggling with my sexuality and making my way out of the closest, I read Jonathan Franzen’s book The Corrections. In it, one of the characters expresses her disdain for a famous gay actress: “I think if you make an evil choice in your life, the least you can do is not brag about it.”

I felt that was very much the attitude of Ireland of 10 years ago, where I was terrified to be outed and afraid to walk down the street holding my then girlfriend (now wife’s) hand.

When Panti Bliss described the gay experience of having to “check yourself”, that was something that I could very much relate to. One night, my then girlfriend (now wife) and I were walking home after a night out in town. We had just started going out and, caught up in the moment, we forget to “check ourselves” and were verbally abused and physically threatened by a group of young men. We didn’t make that mistake again.

She cried because she knew that my fears were well founded. I had some tough days and some dark days when I was coming out and although I experienced homophobia and discrimination as a direct result of being gay, I am one of the lucky ones. I had amazing friends who supported me from the outset.

They always had my back and they got me through some very tough times. They accepted me when I couldn’t accept myself. I also am lucky because I was born in the 1980s and I had the option of coming out. When I read pieces like that written by Ursula Halligan, my heart broke.

No one should have to spend her life living in shame and not feeling that she could live openly as the person she was born to be. A society that made Ursula Halligan and so many others feel like that should hang its head in shame.

People say marriage is about children but the Irish public has recognised that this is not true. Marriage is the public declaration by two individuals of their love for and lifelong commitment to each other, and that’s what makes those opposed to same-sex marriage uneasy.

They feel if we are gay we should be gay quietly and we certainly should not be “bragging” about it in the most public way possible. Society recognises this public declaration and rewards it by bestowing certain rights and privileges on married people.

By failing to affirm gay relationships and suggesting that they are somehow different, society sends out a message to bullies in the schoolyard and bullies on the street that gay people, their relationships and their feelings are wrong and as such it is acceptable to deride gay people publicly.

Irish voters rejected the arguments of those who think that we should be gay at home, behind closed doors, locked in our closets.

Ireland rejected the opponents of same sex marriage who say that members of the LGBT community do not deserve the right to have an engagement party or a wedding. Ireland said enough is enough. On the 22nd of May 2015, Irish voters declared that intolerance in Ireland will no longer be tolerated.

Being gay is not a choice and although at times it is difficult and more challenging than being straight, I feel strengthened by the adversity I have experienced and I feel overwhelmed by the love and acceptance from close friends during the early days and by everyone I know in the past few days.

Even though I am not in Ireland, I have been fully invested in this referendum and its outcome. I was not immune to the arguments of the No camp. It is a tough experience listening to people debate your rights and your family.

I waited with trepidation to see how my native country would classify my wife and I. Would I wake up on May 23rd to be told that Ireland had decided it wouldn’t accept that my wife (to whom I was married in New York) was my wife?

Thankfully the arguments of the No side were drowned out by the outpouring of love and support from friends at home who were so passionately backing a Yes vote and today I stand taller knowing that my fellow citizens have embraced me, my relationship and my sexual orientation.

As Ireland is awash in pride flags, Ireland’s straight citizens have said to their gay brothers and sisters that they are proud of us. That we are entitled to full equality and that equality should be fully enshrined in our Constitution.

We are a little nation but we have a loud voice. Irish people have used their voice to help all those living in the shadows and tell them that there is no need for them to hide or “check” themselves - they are equal, their love is equal, and they have nothing to be ashamed of. Ireland has told those of her citizens living in the shadows that it’s time to come out, that it’s a time to be proud, that it’s okay to “brag” about being gay.

Read more: 'It made me cry': Generation Emigration responds to same-sex marriage result