Today FM picks up listeners in morning and evening as market share rises to 9.2 per cent 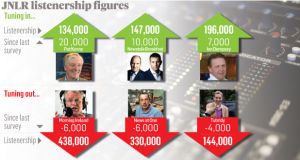 The acquisition of Pat Kenny continues to draw listeners to Newstalk with the numbers tuning-in to his programme rising by 17.5 per cent in the second quarter of the year.

The 20,000 growth (to 134,000) recorded by The Pat Kenny Show is one of a number of positives in the latest Joint National Listenership Research (JNLR) survey for Denis O’Brien’s Communicorp – owner of stations such as Newstalk and Today FM.

Many of RTÉ’s flagship programmes saw a small decline in their listenership but the national broadcaster still dominates the radio market.

Despite a 0.4 per cent quarterly decline in national weekday audience to 22.7 per cent, RTÉ Radio 1 still commands more than double the number of listeners of its nearest rival Today FM, at 9.2 per cent (+0.2 per cent).

Newstalk Breakfast, hosted by Chris Donoghue and Ivan Yates, added 10,000 listeners in the quarter as it increased its audience to 147,000.

2fm saw its market share drop by 0.5 per cent to 6.6 per cent. It lost 4,000 listeners for the second consecutive survey in the mid-morning time slot, with Ryan Tubridy now holding an average audience of 144,000.

Seán O’Rourke, who took over RTÉ’s Today programme after Kenny’s exit, saw his audience fall by 5,000 to 307,000 in the period. Today FM’s mid-morning offering, The Ray D’Arcy Show, recovered some of the 11,000 loss recorded in the last quarter, adding 5,000 in the three month period for an average audience of 223,000.

With 330,000 listeners, RTÉ’s News at One still has a stranglehold on the lunch-time market despite a decline of 6,000 listeners in the quarter. Newstalk’s Lunchtime with Jonathan Healy attracts an average of 72,000 listeners, up 2,000.

Liveline remains the second most listened to radio programme in the State, with host Joe Duffy commanding an audience of 387,000, down 3,000.

Newstalk’s Moncrieff programme added 4,000 listeners in the period, bringing its average audience to 115,000, which is still some way behind RTÉ’s Mooney show, which had an average listenership of 213,000.

Today FM’s The Last Word, presented by Matt Cooper, gained 4,000 listeners on last year bringing its total audience to 155,000. RTÉ’s Drivetime had an average audience of 242,000 and Newstalk’s The Right Hook regained some of the 11,000 listeners lost in the last period, and had a listenership of 123,000.

Some 83 per cent of all adults listen to the radio on a typical day.