House of Cards: He’s much better than the actual US president 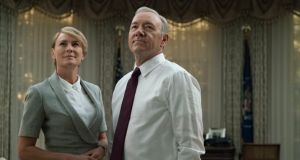 Power couple: the Underwoods contemplate their evil empire in the new series of House of Cards. Photograph: Netflix

House of Cards is back and it’s vying for relevance in our new political reality. It is, in many ways, a relic from the olden times, the long-ago, the time before the Trumpening, when people believed that to manipulate your way to the apex of political power, you needed to be a career civil servant who understood the intricacies of America’s institutions, not just a blowhard in a distressed wig who dresses like a president at parties.

Yes, after four months watching a lump of melted cheese with a rudimentary face drawn on it tantrum its way towards impeachment, there’s something comforting about Frank Underwood’s brand of calculating, dare I say, reflective, evil.

At the end of the fourth episode of this new run, Frank pronounces: “The American people don’t know what’s best for them. I do. I know exactly what they need. They’re like little children, Claire. Children we never had. We have to hold their sticky fingers and wipe their filthy mouths, teach them right from wrong, tell them how to think and how to feel and what they want.”

And I find myself thinking: “Yes! Underwood tells it like it is. He says what we’re all thinking. Manipulate me Frank! Vote Underwood!”

Not Trump
Much like President Bartlet in days of yore, Frank Underwood is the fantasy Democratic president of the Trumpocalyse. The Underwoods are not Trump. If they are anyone, they’re the Clintons as seen on right-wing conspiracy sites – murderous embodiments of the “deep state” manipulating a nation via fake news. And doesn’t that sound wonderfully competent right now?

President Underwood certainly makes a contrast with Trump. When Frank breaks the fourth wall in order to monologue verbosely like a Shakespearian villain, or indeed Foghorn J Leghorn, this suggests a rich inner life seemingly absent from the actual president who engages in aphasic Twitter rants at three in the morning.

Furthermore, Frank Underwood is played by Kevin Spacey, who seems to know all of his lines, whereas Trump is played by several weasels in a rubber man suit, who prefer shrieking incoherently and can’t remember any policies. Also, House of Cards’ stately and reassuring piano and trumpet soundtrack compares starkly with the theme music of the Trump administration, which is, as you know, an oompah-pah tuba, two half-coconut shells and a slide whistle.

And what a wonderful marriage Frank and Claire Underwood have. Claire (Robin Wright), now a vice-presidential candidate, makes for a wonderfully icy Muttley to Frank’s steaming Dastardly. They had a rocky time last year but during an episode in the new season, where Frank sits conferring with Claire as she lies in bed with her speechwriting lover, there’s a tenderness that’s absent from more conventional television romances.

Yes, the couple that malevolently schemes together stays together. I believe that most couples would thrive if they ended each day clinking a goblet of wine and smiling smugly over their evil-doing (I’m thinking of writing a relationship manual). My wife and I certainly do, and if you’ve been following my writing you’ll know we've been manipulating my nefarious ascent through the hierarchy of The Irish Times for some time now (Don’t worry – none of my colleagues reads this column, I view writing it much like Frank breaking the fourth wall. I’ve tried looking off into the distance in the middle of meetings to scheme aloud in the past, but they’ve noticed that).

Anyway, I’m digressing. Unlike Trump, who veers from one policy non-sequitur to the next as his fizzing synapses decay, the Underwoods play a Machiavellian long game. As series five begins, Frank’s power is still under threat from hunky Republican challenger Will Conway (Joel Kinnaman). Conway is a well-meaning, soulful war hero with skeletons in the closet (possibly literal ones), a perfect Penelope Pitstop for Dastardly and Muttley to thwart.

Presidential overreach
So our anti-heroes launch into a vigorous round of plotting, some elements of which are conveniently familiar. They stoke fears of the Isis-like terrorists who dominated the finale of season four, but Frank has had the surviving terrorist secretly imprisoned the whole time (classic Frank). There’s an immigration ban. There’s some voter repression, some presidential overreach and some false-flag operations in which Frank fakes terrorist incidents in order to dominate the news cycle and threaten polling day.

In short: Frank, you scamp!

It feels pacier, leaner and wittier than last season, possibly due to the new showrunners Frank Pugliese and Melissa James Gibson. But don’t worry, it’s still entertainingly ridiculous. The joy of House of Cards is the joy of watching clever baddies manipulating naive voters and less amoral underlings. Ultimately, everyone other than the Underwoods and the viewers whom they have taken into their confidence is seen as a schmuck.

In reality, of course, Frank is a schmuck’s idea of what an evil genius looks like. Politics features plenty of people who think that they’re Frank Underwood, soliloquising for their mirrors and twirling metaphorical moustachios, but who are actually Boris Johnson or Michael Lowry or Roderick Spode. I suspect the most dangerous politicians actually believe that they’re saintly President Josiah Bartlet – even if they’re a bunch of weasels in a rubber man suit.

So the political world is, I think, more accurately shown in dramas such as David Simon’s Show Me a Hero, in which policies are a product of messily competing interests, or comedies such as Veep, in which short-term opportunism and incidental idiocy override any long-term vision.

Meanwhile, in the “real world”, what we can see in the Trump administration and Brexit is not the clever machinations of a malevolent intelligence, but the meaningless offspring of inequality, ideological decay, bad faith, stupidity and informational chaos.

But maybe that’s missing the point. Look at Frank and Claire as they scheme their way towards an end to term limits and the ownership of a dying superpower. It’s a fantasy of control. The appeal of House of Cards is of watching someone who is capable of such manipulations. And for good or evil (mainly evil), isn’t that some thought at times like these?

Olive: Olive branches for women in their 30s
8