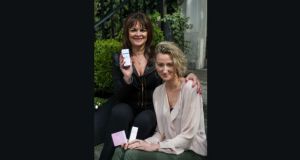 The new series of RTÉ’s Dragon’s Den programme saw the Dragons fanning the flames of Irish industry on Sunday when founder of Co Wexford company Holos skincare, Niamh Hogan, succeeded in obtaining an investment of € 50,000 from Eleanor McEvoy.

“I felt flattered that someone I was inspired by trusted in me and wanted to be a part of my business,” said Niamh Hogan, speaking after airing to The Irish Times.

“Going forward, we’ll be launching in the UK in May and will explore foreign markets this year while aiming to grow the domestic market.

“We’re also launching a new product line this summer and will be training therapists on how to use Holos products in salons and spas countrywide.”

Eleanor McEvoy is the latest Dragon to join the lair on the RTÉ show which is sponsored by Emirates and in its seventh series.

Gavin Duffy, Barry O’Sullivan and Eamonn Quinn have returned to the Den for the new series.

McEvoy said that Hogan’s business “felt right to her” and that she was “investing in Niamh as much as the product” and offered €50,000 for an 18 per cent stake in the business, an offer which was accepted by the Co Wexford entrepreneur.

Hogan established her brand in Gorey in 2014, having spent 12 years working in the natural healthcare industry as an aromatherapist and natural health practitioner with her own practice.

Her range of 17 handmade skincare products and three candles is currently stocked in more than 80 stockists countrywide.

Earlier this year Hogan received a €50,000 Competitive Start-up grant from Enterprise Ireland for 10 per cent share of her business, she also won Gold in the 2014 Bank of Ireland Start Up Awards in the Best Home/Craft-based Start-Up category.

Ms Rudden’s hopes were blown out when she failed to ignite interest in the Dragons, none of whom opted to invest in her business.

Ollwyn Moran is the founder and CEO of Cognikids, which makes patented “gripsuits” allowing babies to move around on hardwood flooring.

The company also makes patent-pending intelligent baby products such as a sensory soothing bib for teething babies and a baby bottle gripper which makes self-feeding easier for babies.

Moran gave a confident pitch which included the introduction of two babies wearing her grip suits.

Gavin Duffy said he would hate to pass up on an opportunity and offered € 150,000 for 30 per cent of the company - an offer which was ultimately rejected by Moran who said she was confident she “would secure the funding” she requires elsewhere.

After some deliberation Wynne accepted Alison Cowzer’s inaugural Dragon’s Den offer, stating that, although he would have liked to whittle the Dragons down some more, he had to “accept the value that Alison will bring” to his company.