An Irish-written sitcom made and broadcast in Ireland? Don’t laugh

Given that RTE has no scripted comedy department, it’s no wonder writers look elsewhere. There are plans to stem that flow 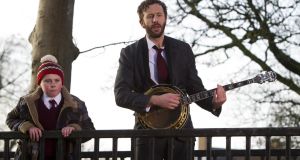 Comedy, says Billy McGrath, is like music. “There’s often a zeitgeist, people latch onto it, and then it burns out.” The laughs start to come from some other source, delivered in some other style.

In the wake of the BBC-commissioned Mrs Brown’s Boys and Sky One’s Moone Boy , there has “never been a better time” for Irish comedy writers to pitch a sitcom, says the creative director of production company Sideline.

Sideline’s new offshoot, The Comedy Division, is on a hunt for scripts, inviting would-be Graham Linehans and Sharon Horgans to submit the first episode of a half-hour sitcom (or two, if they like) by March 31st.

Six scripts will then go through an intense series of joke-honing workshops in which the writers will be partnered with script editors and experienced directors who will film live stage readings during next October’s Dublin Theatre Festival. The performances will then be edited into trailers that can be pitched to broadcasters.

Humour is compulsory. Potential appeal to UK and/or US broadcasters is preferred.

McGrath expects 30-40 scripts to be submitted and has seven in his in-tray so far. The trend that is emerging is “influenced by Modern Family ” – taking the traditional format element of trapping characters in a particular situation and adding a dash of that sitcom’s mockumentary flavour.

McGrath has a very serious ambition to make Ireland as synonymous with scripted comedy as Scandinavia is with crime drama. “But it would take a very original writer to make that step,” he says.

Ireland “is rich in comedy the same way as it was in rock music in the 1980s,” he believes. However, young writers, not expecting much, tend to bypass the Irish television industry and pitch straight to the UK, or even the US. “We’re trying to stem that flow.”

At RTÉ, it is parody and satire that is in vogue with commissioning editors. “I don’t think it’s a secret that there’s no scripted comedy department within RTÉ. There isn’t anyone who specifically has the job of reading scripts and writing up script reports and creating a pipeline between young comedy writers and the screen,” says McGrath, citing actor-writer Chris O’Dowd’s recent comments that RTÉ could never have made Moone Boy , partly because he wouldn’t have known who in Montrose to pitch it to.

McGrath, who is a former commissioning editor for entertainment at RTÉ, understands why the broadcaster is wary of the genre. “It’s difficult. You need to have the confidence and the resources to back a sitcom for two or three seasons. You might be filming episodes in a block of six – it’s not like the Late Late Show , where [executives] can sit down on Monday morning and have a post-mortem in time for the next show.”

Theatre does provide an opportunity to shape and refine. “The great thing about Mrs Brown’s Boys was that Brendan O’Carroll had the luxury of knowing that the world of the show worked from 15 years of doing it in the theatre, and hats off to him. BBC Scotland knew that when he went to air, he had broken box-office records in Glasgow.”

But “it’s a huge jump”, according to McGrath, for a broadcaster “to invest in a writer, not a star”.

TG4 is supportive of comedy – commissioning director Micheál Ó Meallaigh attended a sitcom briefing held by Sideline in Dublin’s Smock Alley Theatre last month, and the six winning writers will, as a competition bonus, be offered paid work for some days with the writing team of Teach Sheáin , an Irish-language version of Cheers pencilled in for pre-production this summer.

Sideline currently gets its bread and butter from producing entertainment formats such as Take Me Out and Celebrity Mastermind , but its scout for sitcom writers is not its only foray into comedy. A Channel 4 pilot for The Rubberbandits aired last November; it has talked to RTÉ about developing a studio series with The Nualas; and it will pitch a pilot show featuring sketch trio Foil, Arms and Hog to Irish and British broadcasters next month.

It is also seeking investors to help it launch an online Irish comedy channel. “There’s no way we can do that on our own. We need a partner and it needs very clear investment.”

And as for any disappointed sitcom creators, Sideline apologises in advance. “We are not psychics or magicians,” its submission guide states. “One or two future star writers may be missed.”