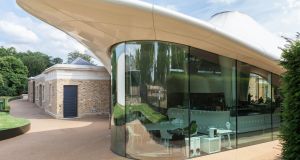 The Serpentine Sackler Gallery in London

There are Sackler galleries at some of the world’s leading arts institutions: the Serpentine, Tate, and the National Gallery in London have them, as do New York’s Metropolitan Museum, and the Smithsonian in Washington DC.

For decades, the Sacklers were synonymous with the most generous levels of arts patronage. Then the New Yorker published The Family that Built an Empire of Pain, an article by Patrick Radden Keefe, outlining the aggressive marketing tactics and lawsuit settlements that have enabled the Sacklers’ company, Purdue Pharma, to make vast wealth from OxyContin. The drug is the most implicated in the opioid crisis, which has been responsible for a reported 400,000 deaths in the US alone, between 1999 and 2017.

Other media outlets followed up, and now the first thing people think of when they hear the Sackler name isn’t necessarily great philanthropy. The Smithsonian Institute recently reported that it cannot remove the family name from its Asian art museum: it is legally obliged to use it in perpetuity.

Sponsorships and philanthropy are tricky businesses. In London, Mark Rylance has just announced his resignation from the Royal Shakespeare Company, in protest at the BP oil company’s sponsorship of the institution. “I do not wish to be associated with BP any more than I would with an arms dealer, a tobacco salesman or anyone who wilfully destroys the lives of others alive and unborn,” said the actor.

Philanthropy and arts patronage sanitises some truly awful personal and corporate behaviours. As tobacco and, more tentatively, alcohol sponsorships are eradicated from sports and the arts, their replacements are not always a better societal bet, but the patronage process is surprisingly effective in the whitewashing game. It is a practice that has worked for centuries. The Medici are renowned as patrons of the arts, rather than as oppressive, warlike and frequently murderous.

Andrew Carnegie is known as a great philanthropist, rather than a man who, in partnership with the reviled Henry Clay Frick, violently resisted unionisation in his steelworks, which resulted in a lockout, and what became known as the Homestead Massacre. In the “Andrew Carnegie Dictum”, he argued that a man should spend a third of his life learning, a third amassing as much wealth as possible, and a third giving it all away to worthwhile causes.

I would prefer to decide where to spend my money, whether in the arts or sports, rather than pay taxes... Especially when it would mean I got feted and given further tax breaks

That’s all very well, until you pause to consider the misery, suffering and inequalities perpetuated by the central “wealth amassing” life stage. The logic being that the later philanthropic period of your life gives you a pass for the processes by which you have made your obscene volumes of loot. And that’s the point: the level of wealth that even today’s revered philanthropists have is obscene. You don’t make a ton of money doing good works. Names such as Carnegie live on, but not those of the exploited labourers, or those who died in poverty because of their work practices.

So what’s an arts organisation to do? The Arts Council insists that those they fund should seek additional sponsorships, so that they are not too “reliant”; and friends schemes can only go so far. Every arts organisation dreams of a major sponsor stepping in to support it, endow it and generally save the day. And yet they are also increasingly under pressure to only accept ethical sponsorships.

Meanwhile, there’s an idea that companies that are incredibly generous sponsors are off the hook when it comes to facing pressure to, for example, pay more taxes. “Look at all the good they do in the community” is the refrain. Indeed.

And I would prefer to decide where to spend my money, whether in the arts or sports, rather than pay taxes that filter it through Government channels. Name me a single person who wouldn’t. Especially when it would mean I got feted, invited to stuff and given further tax breaks on my generosity. “She can’t be all bad,” they’d say. “Look how much she gives to opera.”

Wealth inequalities will always exist, and it is healthier for the cultural sector to have a variety of funding sources. But we also need to step back and ensure that those individuals and companies that have extreme levels of wealth don’t get a pass because they fling a small portion of it back at the arts.

‘There is something very cool about Irish people’
8