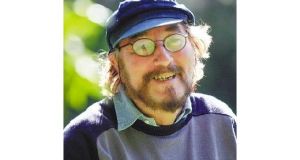 Hugh O'Donnell: I was really more a kid from Dublin's Sheriff Street who had become fascinated with acting who happened to be a stockbroker, rather than the other way around.

From stockbroking, to founding a theatre, Hugh O'Donnell has gone from one success to another. He tells Shane Hegarty his secret

It was a quip that put Hugh O'Donnell on the road from Sheriff Street to city stockbroker. Fresh from school and doing an interview with Irish Life, the interviewer asked him for one good reason why the company should employ him. "I just said, 'I think I'd be a great investment for Irish Life', so he said, grand, you're going into investments. And that's the only reason I got into that area." By the time he left, a decade later, he boasts that he was so valued the company paid him more than they did the managing director.

He has always, however, had a way with words as much as he had with figures; which is why he is here to talk about his first novel, 11 Emerald Street. It tells the tale of an inner city boy, Robbie, who, after being crushed almost to death at Croke Park on St Patrick's Day, comes to believe that he can heal people. Sent to an orthopaedic hospital, he sets to work on his fellow patients.

It is fiction, but he was brought up in the real Emerald Street and the novel is steeped in the memories of 1950s Dublin and mirrors many of the events in his life.

"The accident really happened to me," he explains. "I was 11 at the time. I got literally killed stone dead. I can remember lying there dying and absolutely knowing I was dying. First of all getting really angry and then thinking that my Ma will kill me even though it wouldn't matter, of course. Next thing I remember, I could see these waves, really peaceful waves and it was actually my breath coming back. A man had got my heart going. And I was whizzed into hospital."

He became stranded in an orthopaedic hospital. "They seemed to lose my file there. I went in there for observation, but they put me down for flat feet or something. My Ma and Da at the time wouldn't have questioned authority, so I was there for a year."

He remembers another boy called Robbie on whom he based much of his lead character. "I'm hoping he'll read this and I'll find out what happened to him." They'll have good tales to swap. Born in 1947, O'Donnell ran around the Dublin streets with Jim and Peter Sheridan. Along with Peter Sheridan senior, the three of them founded a theatre group and put on plays in local halls. As one of the few boys of his age to do the Leaving Cert, he ended up in Irish Life although his only awareness of stocks and shares had come from his father listening to the business news on the radio each lunchtime.

As an investment fund manager, he got on well and eventually spotted a new opportunity. "We were paying so much commission to the stockbrokers and it got into me after a while, so I said I wonder if I can become a stockbroker. So I left and set up Riada with three other friends, and it was the first new stockbroker firm in Dublin for 50 years."

With his appearance comfortably ragged, he looks so unlike the average stockbroker now that it's hard to picture him in the job, but he says that he loved it and was not averse to using "the Dublin thing" to his advantage.

Nevertheless, Riada became a little too successful. "It started with six people and I remember going in to it eight years later and there were 60 people. And there's no automatic way of adjusting to that, you just have to pick up the ball and make it work. And that's when I thought, uh-oh, I wouldn't mind getting out of this. And I was always tipping away at acting and writing. And during that time I had a few bob, so I built Andrews Lane theatre."

All through his financial career, he had been involved in amateur drama.

"I was really more a kid from Sheriff Street who had become fascinated with acting who happened to be a stockbroker, rather than the other way around."

While he was regularly included in Finance magazine's top 10 traders, he also performed a one-man show in Edinburgh and was also voted best amateur actor in both Ireland and England. At a festival in Des Moines, Iowa, he was voted the second best actor in the world; beaten to first by a Russian mime artist. He must have been some mime artist.

"To be fair to him, he was," says O'Donnell. So, after 13 years with Riada, he finally jumped into theatre full-time in 1989, taking the money from the sale of Riada to an international bank, ABN Amro, and buying an old clothing factory as a theatre. It was a space for his own theatre company, with which much of his writing was adapting scripts.

"I used to write in extra parts. Say there were six in a cast and we'd have eight people, then I'd write in two extra parts. I don't know what the rights people would have to say about that."

Like so much in his career, Andrews Lane Theatre snowballed. "People started calling into us, professional theatre groups and to be honest with you it got way bigger than we thought it would, almost scary really. It was just a little idea, then suddenly it was a big thing. There was huge demand for the space. We started employing people. Two people, then three people then five. Pat Moylan [who now owns the theatre\] worked full-time and really ran it. I was the guy paying in a few bob if it wasn't going well and taking out a few bob if it was."

He sold the theatre in 1996. Newly separated from his wife, and with four daughters, he decided on a clean start. "I wanted to work completely from scratch."

Working as a financial consultant for Jim Sheridan, with whom he is still good friends, he wound up in Los Angeles. In the hotel lobby, he found himself inadvertently pitching a movie about a former-CIA hypnotist who saves the world, and although the film was never made, he ended up as a reader for Paramount and Warner Bros, perusing scripts sent to the studios. One weekend, Saving Private Ryan arrived in the post. "I gave it 10 out of 10. I'd one or two suggestions, which I'm sure they didn't include in the finished movie," he laughs.

He wanted to write film scripts, but found that by comparison, stockbroking looked simple. "It's murderous. No question. In Santa Monica alone they reckon there's 10,000 scriptwriters. Actually, that's where I was staying, so there were 10,001."

He returned to Dublin after six months, but he has written five scripts for Universal Studios and three for independent companies and, while a couple of those are still under negotiation, he turned to writing the novel because he wanted a bit of control over his work. 11 Emerald Street was snapped up by the first publisher he sent it to and now he's hoping it will be adapted for the big screen. He has bought himself a replica Oscar for his office by way of inspiration.

He returned to Sheriff Street recently, and found his old house is still standing, but the old families are long gone But he hasn't left it behind. "It wasn't poverty, but it was working class and you were determined to get on. I suppose I was an optimist as a kid and I grew up with a bunch of ferocious optimists, so maybe that's what helped." He has had an unusual route through life and while he insists that he doesn't dwell on it much, he acknowledges that his boyhood accident may have given him an edge.

"I suppose when you've come so close to death - and I did - then it means that you don't have to be fearful of anything after that."

11 Emerald Street by Hugh O'Donnell is published by Jonathan Cape, £10