Who’s Afraid of Virginia Woolf? review: Total war in a theatrical battle like no other 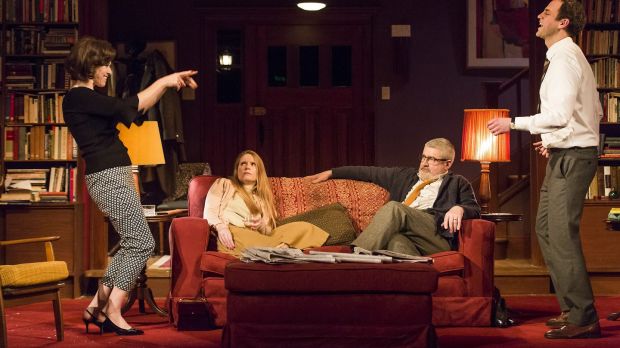 Be warned: the tempestuous marriage between George and Martha contains so many dazzling cruelties and vicious verbal flayings that some of the audience are likely to be lacerated in the crossfire. One lofty put down in the vigorous opening minutes of the Gate’s excellent revival of Edward Albee’s still venomous, still marvellous play from 1962, hits frighteningly close to the bone. “I swear,” Fiona Bell’s restless Martha tells Denis Conway’s fading George, “if you existed I’d divorce you.” The stakes are higher than you might imagine: here people can be made or undone with words alone.

So begins the longest night of their lives, one heaving with wit, desire, humiliation and make-believe, and lubricated with mind-warping quantities of alcohol. George, a stalled academic in a New England college, and Martha, the college president’s daughter, invite a young couple, Nick and Honey, back home for a nightcap.

And what a place. Jonathan Fensom’s ingenious set maintains an exquisite balance between homeliness and hellishness, shrinking the stage into a cluttered 1960s American living room that seems to glow red under gathering mischief. It’s an actual den of iniquity.

In director David Grindley’s deeply attentive handling of the play, the compelling friction of George and Martha’s relationship – as bitter as it is binding – mutates into something more fantastically unsettling: a disintegrating weave of reality and fiction. The younger couple, Mark Huberman’s Nick, a white-bread academic on the make, and his sweetly dim wife Honey (Sophie Robinson, giving an immensely clever performance of incomprehension), are both foils and spectators to George and Martha’s riveting performance. Here, Fensom’s domestic set subtly inserts one theatrical frame within another, archly aware that all the guns and seductions, stories and devastations of George and Martha’s “total war” is a theatrical battle to upstage one another.

Bearded, bespectacled and sinking into his cardigan, Conway resembles a man rolling up into himself; as prickly and protective as a hedgehog. Bell is altogether more foxy, strikingly coiled and physical, slinking between baby-talker and man-eater. Here acid, there beaten, it is also she who best understands this paradoxically sustaining relationship and its boozy swirling nights. Their tears, she says, make the ice cubes for their drinks.

Tonight, though, the games are coming to a brutal end, and Albee’s sly play still jabs at the reasons behind our comforting illusions and outright deceptions, the stories we tell ourselves and each other. George and Martha keep a ready reply when asked if something is true: “Maybe, maybe not.”

At well over three hours, played out almost in real time, this is a gruelling, exhausting experience, yet an unusually cathartic one, as both couples are mercilessly stripped of such illusions. The last image, an almost painterly composition under Jason Taylor’s slowly dying lights, is divinely ambiguous about the consequence. Have George and Martha finally been freed from the shackles of story, or even from each other? Maybe, maybe not.

How Irish women won the right to vote in 1918