Juno and the Paycock review: The jagged charm of an interrupted song 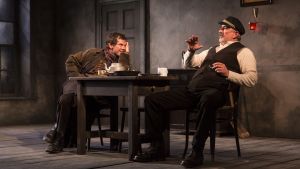 Juno and the Paycock

Barely a squeak, a knock, or an approaching footstep is sounded in Sean O’Casey’s 1924 play without raising some panic. In a teeming Dublin tenement during the Civil War, such moments are frequent, but the familiarity of regular revivals have seen them played largely played for laughs: The “terrible tatheraraa” at the door that halts the idle Captain Boyle’s swagger; the threat of his redoubtable wife Juno that will see his shiftless accomplice Joxer escaping out of a window; or, more menacingly, the quiet arrival of brooding IRA men, whom their son Johnny, wounded in the War of Independence, fears most of all.

For all the music of the play – its frequent songs, its salty comedy and speech – O’Casey sees a world that is much more sombre: full of lofty promises and hobbling debts, where fortunes rise and fall, and everyone is at war.

This bravely stark production, directed by Mark O’Rowe, treats the play not as a lacquered melodrama, but almost as a documentary, raw and unvarnished. Paul Wills’s set initially seems as monochrome as an old photograph, into which colour appears, under Sinéad McKenna’s expert lights, only gradually: the red glow of an Immaculate heart, the rich colours of goods bought on credit with the promise of a windfall. Likewise, the cast deliver performances that can shift suddenly, refreshingly rooted and real.

There is a moment, during the second act’s thin bubble of comfort, when Derbhle Crotty’s face relaxes, briefly, into a picture of happiness, as Juno sings arm in arm with Caoimhe O’Malley’s Mary. It makes you better appreciate the harder etches of worry that have otherwise shaped her: Crotty’s performance, striking and unsentimental, is of a woman weighted down with responsibility, bearing it with great stoicism, in a performance freighted with a sense of history.

Marty Rea delves as deeply into Joxer to find something similarly revelatory, less comic relief than a tragically timid survivor. With his tall frame crouched, eye contact kept to a shy minimum, he makes Joxer’s aphorisms and repetitions seem like smothered verbal tics (“It’s a darling story, a daarlin’ story!”). When he loses the words to a song, which he otherwise sings beautifully, the gesture matches O’Casey’s tragicomedy note for note.

While O’Rowe admirably casts various actors against type, not everybody is so comfortable with O’Casey’s Dublin voice. Where they compensate, particularly in the case of Declan Conlon’s strutting “Paycock”, is in finding new ways to fit their skin.

Directing a work that is not his own for the first time, O’Rowe takes his time with the play, which gives Conlon room to move from loveable charlatan to a man with flashes of corrosive anger, a fine line between rogue and abuser. And there is a succession of such accomplished actors in brief appearances (Peter Coonan, Ingrid Craigie, Emmet Kirwan and, commandingly, Bríd Ní Neachtain as the mourning mother Mrs Tancred), you may well ask, as Boyle does, What is the stars? The production does not yet flow, but it has the jagged charm of that interrupted song; a fitting roughness for a work of dissent and discord.