James Joyce brought to life with the music of The Dead

The last story in The Dubliners is already full of song, but opera proved to be a great way of bringing out the ‘internal arias’ in characters’ heads 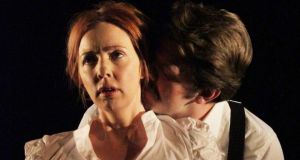 The party has barely started, but it already seems to be going around in circles. On the floor, near a long dining table set at a stark angle, guests revolve in stately motion, twirling gracefully and reaching into a gesture that resembles a wave goodbye.

“Who can pirouette on the spot?” asks the director, Jo Mangan. The actor Clare Barrett whirls through a convincing 360 before Lisa Lambe follows suit with balletic poise. In a nearby corner of their rehearsal space, a vast bright dance studio, the conversation over an upright piano seems to correspond.

“The way it’s written, it can just go in a loop,” the singer Rory Musgrave says happily, as the composer Ellen Cranitch plays through the spacious notes of a new song, which rise and fall like a carousel. “It’s almost completely circular.”

The song, they discover, can be played twice through over the scene, allowing for the possibility of new lyrics. “I could look at other words,” offers playwright Tom Swift, “but sometimes repetition is nice. People can pick up on things.”

It all seems quite appropriate – these repetitions in music, words and movement – to the task at hand; bringing James Joyce’s masterful short story The Dead into an operatic form, where people celebrate, miscommunicate, and make forlorn realisations in something like an endless cycle.

“Do you want to go once more?” Mangan asks her performers, and around they go.

Adapting The Dead for opera seems like “an obvious choice because of the amount of music that’s in the piece already”, Swift tells me as we slip into another room. Indeed, as Gabriel and his wife, Gretta, join the annual Christmas party of his elderly aunts, the embarrassments, frictions and discoveries of the night are punctuated by song. In the story, traditional airs come into contact with opera references like mingling guests. The ageing Aunt Julia sings a hesitant version of Bellini’s Arrayed for the Bridal, a dinner conversation bemoans the decline of opera in Dublin, and a stirring rendition of Lass of Aughrim leads to a lovelorn revelation.

“Also, in the operatic form it’s perfectly permissible to stop the action and sing your thoughts out loud directly to the audience,” says Swift, with good humour.

“And in Joyce’s story, it’s all very internalised. There are lots of internal arias that are going on in Gabriel’s head all of the time.”

Cranitch, a composer who has written several scores for theatre and dance, and who presents Lyric FM’s traditional music programme Grace Notes, recognised Joyce’s musical cues but wasn’t inclined to become a slave to them.

Cranitch composes on a piano (the one instrument featured in Joyce’s text) but decided to write for a string quartet. “I thought that would be a nice colour. It’s very parlour.”

Joyce’s work is often celebrated for its style, a third-person narration that famously changes colour, like a chameleon, when it brushes against different characters: “Lilly, the caretaker’s daughter, was literally run off her feet,” it begins.

When, in rehearsals, Mangan unfussily reassigns some spoken lines from Lambe’s Gretta to Ruth McGill (as Molly Ivers), it seems anyone can be in control of the telling in Performance Corporation’s version.

In Joyce’s story, Gretta is more observed than observing; Swift’s text had given her more of a voice. But that has begun to change. “For some reason, it doesn’t quite work, so we’ve gone back to the idea of different characters sharing the narration,” says Swift.

That brings it closer into line with the company’s first show, 2002’s Candide, in which six performers played up to 50 parts. “The joy of that,” remembers Swift. “You can bring the audience along with you, without patronising them, and allow them to imagine things. I guess it was an experiment [to discover] would that work in an operatic setting? We reckoned if we were going to make it work, we’d need actors who could switch on a sixpence; they’d need to be great actors and great singers.”

Of the cast, only Musgrave has an established career in opera, but Lambe, Barrett and McGill are all actors with considerable musical experience and unerringly precise voices – in rehearsals it is already making for a much spryer performance. During one complicated sequence – a confrontational exchange between the internationally inclined Gabriel and the mocking nationalist Molly Ivers – Musgrave is asked to walk backwards, lock eyes with McGill across the room and sing. Throwing down a co-ordination gauntlet, McGill smiles, stands on one foot, pats her head and rubs her stomach simultaneously, and sings. Easy.

Moving from theatre to opera requires its own balancing act. As a playwright, Swift had grown more fascinated with rhythm and music to the point that he often found himself “writing in verses rather than in scenes”. He was accepted to an opera-writing course at the esteemed Aldeburgh Music in Suffolk, England, and was subsequently awarded a Jerwood fellowship to write a new opera, Beyond the Pale, currently in development with composer Ben Scheuer and director Tom Creed.

The Dead’s development as an opera has been more tentative: an early version was presented as an oratorio, sung from lecterns, and Cranitch previously referred to it cautiously as “an opera-type thing”. (Swift has also detected a wariness towards opera from the uninitiated: “It was almost as if I’d asked, ‘Do you want to come to a prayer meeting?’ ”)

The Dead is now most definitely a chamber opera, even it doesn’t follow every operatic convention. “We don’t have a grand aria for everyone to stand at the front of the stage and deliver,” Cranitch says. “There isn’t that. It is really more of an ensemble piece.”

But some time-bending operatic techniques have had a fortuitous effect on the book, for which two lines of prose can inspire several minutes of music.

“There can be huge chunks of prose in a story that are of absolutely no use to you dramatically on stage,” Swift says. “You find the real drama is in a throwaway remark or a comment.”

Seizing such brisk details can make for a snappier approach; a meeting of the quick and The Dead.

Have the circularities of the story – the annual celebration, lives stuck in a rut, an anecdote about revolving workhorses – found correspondence in the form?

“It only strikes me now, but I made a decision to put the very final passage of the story at the beginning, and that implies a circle,” says Swift. “By the time we get to our final piece, One by One, and it’s talking about the inevitability and certainty of death, originally we talked about going back to that initial section.”

Now, however, he feels Cranitch’s music will do the work for them. “Hopefully we can see the snow and feel the snow, falling faintly.”

Conor McGregor, Crumlin and the Kinahans: an unrecognisable Dublin
10