Golden years: 10 pop stars who made great music in their sixties and beyond

How much harder it is for a star to deliver records that matter when, like Madonna, they have passed their 60th birthday? 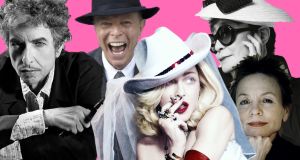 It’s good to have Madonna back. The world seems a weedier, less vital place without her. A whole generation has punctuated life-altering moments with a series of records that showed just enough evidence of evolution – or change, anyway – to keep in pace with the zeitgeist. Medellin, the first single from her upcoming album Madame X, suggests that she still knows how to deliver. A collaboration with Colombian singer Maluma, the songs slinks its way through a series of persuasive hooks without threatening ever to boil over. You’ll play it a few times. You’ll play it a few more times. But will you play it in a year’s time when the urge for a bit of Madonna announces itself. After all, Vogue, Ray of Light and Holiday are right there.

These are the perils of the late surge in a musical career. An old associate and I once agreed to call it the “Blue Mask Effect”. That Lou Reed LP was released in 1982 to rave reviews. Fans played it, liked it and put it back in its sleeve. A year later, when in the mood for Lou, most returned to Transformer, Berlin or something else from his high period. The great man was barely 40 then. How much harder it is for a star to deliver new records that matter – records that can compete with their best – when, like Madonna, they have passed their 60th birthday. A few threaten to do it. A few actually manage that feat. Here are 10 who, at the very least, have made an effort in their seventh decade.

Arguably, the most potent of all the sexagenarians – when he was still just that – listed here, the former crooner vanished for whole decades at a time, but, when he returned, he never failed to deliver a record that scared as many horses as it excited open-minded listeners. He delivered three records after his 60th birthday and each one is an avant garde classic: The Drift, Bish Bosch and, with drone-rock specialists Sunn O))), the excellent Soused. Hedied earlier this year, but enthusiasts still get to enjoy his excellent score for Brady Corbet’s imminent Vox Lux.
After-60 relevancy rating: 60/60

Tricky one this. Only an absolute cad could fail to admire the warm, amusing bard of New Jersey. Among the many reasons to adore his Springsteen on Broadway show was the great man’s willingness – indeed, keenness – to admit that his “authentic” image was all a bit of a con. The early records are eternal. Recent albums such as Wrecking Ball and High Hopes get raves from the rest-home habitués in Rolling Stone magazine and there are some good songs there. But only a very loyal follower would play either before Darkness at the Edge of Town.
After-60 relevancy rating: 30/60

Hard not to give him his due. The recently departed Canadian crossed our current threshold way back in 1994 and went on to enjoy a thriving Indian summer. None of the five albums he released after that point were as beloved as his 1970s gems or of 1988 comeback I’m Your Man, but Old Ideas, released in 2012, charted higher in the US than any previous release. Always a weary voice who seemed at home with life’s disappointments, he adapted his style comfortably to the demands of old age. In My Secret Life from Ten New Songs (2001) is always worth an airing.
After-60 relevancy rating: 45/60

Your properly out-there performers tend to cope better with the passing years. If you were never wholly in fashion then it’s hard to fall out of that condition. Anderson unexpectedly became a pop star in 1981 when O Superman, an eight-minute post-modern treatise on everything, somehow became a number two hit in the UK. She continued to pursue a combination of performance art and off-centre synth pop that never got remotely stale. Landfall, a collaboration with the Kronos Quartet from last year, is as persuasive as anything she’s done.
After-60 relevancy rating: 50/60

Everyone loves Johnny Cash. He was the country star that people with haircuts liked before country music became respectable for people with haircuts. After a decade or so of only respectable sales, at the age of 62, he entered one of the great late periods with American Recordings. It implies no disrespect to point out that the 1994 album – and its five sequels – were very much the creation of producer Rick Rubin. He nudged Cash towards songs by Nick Cave, Depeche Mode and Trent Reznor. He found a dusty, last-call aural complement for Cash’s battered vocal chords. The albums unexpectedly offered a signature sound of the 1990s.
After-60 relevancy rating: 55/60

Well, there are millions out there still dissecting the records he has made since his 60th birthday in 2001. So we must admit that he’s still part of the conversation. There have, in fact, always been people arguing that what he’s doing now is as important as his work in the 1960s and 1970s. Nick Cave (who hasn’t released a studio LP since his 60th) used to flog this line back in the era of Knocked Out Loaded (1986). Modern Times (2006), which got to number one in this country, is the pick of the recent(ish) bunch. It’s diverting. It’s odd. But it isn’t Blonde on Blonde.
After-60 relevancy rating: 45/60

Another artist who, by inventing her own style, was never in any danger of disappointing those who demanded that an artist play by established rules. Born and raised in New York, Monk developed a style of vocal, often nonlinguistic music that gathered a cult following in downtown lofts during the 1970s. She has been honoured by many of the great cultural institutions without much troubling the mainstream. Recent records such as On Behalf of Nature are as fresh as anything being produced in the nether-region between classical and popular.
After-60 relevancy rating: 55/60

There is no surer identifier of a misogynistic jerk than some joke about how the Japanese experimental artist somehow broke up the Beatles by being insufficiently blokish in her talent. Ono deserves a place here for her triumph in annoying these idiots with a recent, defiantly discordant version of Imagine (which she co-wrote, remember). She was then 85. Take Me to the Land of Hell from 2013 is also excellent – a stubborn blend of ambient meander and J-rock racket. Legendary status undiminished as she moves deeper into a ninth decade.
After-60 relevancy rating: 57/60

It is ungallant of us to point it out, but the roots singer and composer – who broke wide with Car Wheels on A Gravel Road in 1998 – was born as long ago as 1953. Nothing much has changed in her style over the decades. Her wealth of experience and an increasingly ragged wit have added to the appeal of recent, sexagenarian albums such as Down Where the Spirit Meets the Bone and The Ghosts of Highway 20.
After-60 relevancy rating: 52/60

An odd one. An example to us all. Realistic Bowie enthusiasts will argue about when he “went off”. The really unkind will give him only as far as Lodger in 1979. More reasonable analysts will allow Scary Monsters (and Super Creeps) from 1980. The sheer popularity of Let’s Dance from 1983 surely allows it into the canon. After that it was a bleeding nightmare. Black Tie White Noise from 1993 is (see above) a classic Blue Mask album. But that was an improvement on the awful Never Let Me Down from six years earlier. Many had given up hope when, in 2013, then into his mid sixties, he delivered the brilliant The Next Day. The even better Blackstar followed just before his death in 2016. That’s how to do it.
After-60 relevancy rating: 58/60