Within hours of launching this week, BLACKPINK had racked up millions of YouTube views 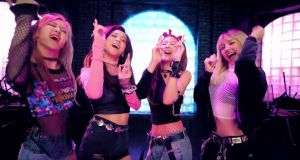 Mr Sanka - Flight Mode
Flight Mode is the infectious debut collaboration between LA-based Dutch artist Nick Van Hofwegen and London-based producers Mustafa and James. (The title references the air miles required in getting all three in the same city to record.) In interviews, the trio have mentioned a shared love of Daft Punk and obscure 1960s and 1970s pop. But if you listen closely you’ll also hear echoes of everything from Italian house to The Strokes.

BLACKPINK - Boombayah
YE Entertainment is a Seoul-based K-pop behemoth so ruthlessly successful it’s emerging talent roster is picked over in the financial pages of the Korean press. So naturally, when the company’s most successful girl band 2NE1 went on hiatus earlier this year, YE CEO Yang Hyun Suk had a replacement girl band ready to roll out within weeks. Blackpink are an edgier proposition than their more clean-cut predecessors. (One fresh-faced young singer here claims, rather implausibly, to have drunk “a bottle full of Henny”.) But the public are lapping it up. Within hours of launching this on Monday, the band had racked up millions of YouTube views and their debut album Square One shot to No 1 in 14 Far East countries.

Tebi Rex - Black Enough
Tebi Rex are Maynooth alternative hip-hop duo Matt O’Baoill and Max Zanga, and Black Enough is their upbeat celebration of race, identity, crazy dancing and biscuits. (There is, as they say before the late-night movie, strong language from the outset.)

Innocent Bystander ft. Daniel Hoff
Dublin based songwriter and producer Mark Healy’s stated mission statement here is to “make guitar music that takes nothing from the blues”. The results sound a little like New Order and a LOT like when you’ve accidentally got two different songs playing simultaneously on your laptop.

Marian Keyes: ‘What doesn’t kill us makes us funnier’
7

Paschal Donohoe on The Economics of Belonging: Crisp analysis of discontent
9