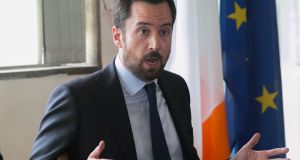 Minister for Housing Eoghan Murphy: There are more than 180,000 empty homes throughout Ireland, according to the Central Statistics Office. Photograph: Gareth Chaney Collins

The Repair and Leasing Scheme (RLS) was launched in February 2017, with then minister for housing Simon Coveney promising it would convert up to 800 empty properties into social houses during the first year.

Under the initiative, local authorities pay for the refurbishment of a rundown property up to the value of €40,000, in return for the homeowner leasing it to the council for a minimum of 10 years.

After just nine houses were delivered under the scheme last year, Mr Coveney’s successor Eoghan Murphy relaunched it last February with changes to make it more attractive. Despite these changes, latest figures show just another six homes have been delivered and 52 agreements for lease have been signed, out of a total of 942 applications.

There are more than 180,000 empty homes throughout Ireland, according to the Central Statistics Office.

“I have had complaints from people trying to use this scheme that everything about it is too complicated. The figures show the process is the problem.”

A spokesman for Mr Murphy accepted the current figures “are low” but added “this is a new scheme which was only rolled out to local authorities at the end of February last year”.

The spokesman said the scheme has “significant potential but there are areas where it can be improved”. He said data shows an increase in the number of applications.

“It is probable that the true impact of the recent changes to the scheme will not become apparent until later in the year,” he said.