Leonard Cohen’s Yeats pilgrimage: how the singer was drawn to Lissadell 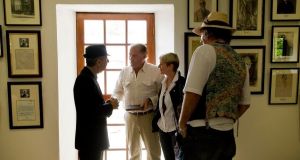 It was his life-long love of the poetry of Yeats which drew Leonard Cohen to perform at Lissadell House in Co Sligo in 2010. Of that there is no doubt.

Edward Walsh, current owner of the house, saddened by the legendary singer’s death, recalls how the two dream concerts became a reality.

“When the concert promoter, John Reynolds, a close friend of ours, first raised the idea of a concert at Lissadell with me, I was wary. He mentioned July and I thought,: ‘Oh no, the height of summer, the house and grounds will have to be closed’. But as soon as he said, ‘Well, this is a state secret, I am thinking about Leonard Cohen, I’ve already spoken with him and he likes the idea’, that made it completely different, I knew we had to do it.”

Walsh described the natural grace and humility of the man who had arrived at Lissadell on the morning of the first concert, July 31st, 2010, in a 20-seater mini-bus. “No airs, no arrogance, just a desire to please his ‘friends’, that’s how he referred to his fans, as his friends.

“I’d always been a fan of his music. But even so, he was a huge figure, so I had been expected him to pull up in a limousine. But no, Leonard Cohen was not like that. ‘What this?’ I wondered as a white bus arrived. ‘Where’s Leonard Cohen?’. He was in the bus. He was so thrilled to be at a place he associated with Yeats.”

In 2003, Walsh had together with his wife, Constance Cassidy, purchased the historic house, built between 1830 and 1835 as the family home of the Gore-Booth family.

Reynolds, creator of the Electric Picnic, who had got to know Cohen, encouraged the singer to resume touring. Aside from feeling that Cohen, who had retreated to a Zen monastery in California, had more to offer as a performer, there was a pressing practical reason. 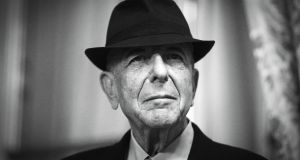 Cohen had discovered he had a critical financial problem; his manager would eventually be convicted of embezzling his fortune and he was broke. Reynolds was aware of the singer’s love of Yeats and general interest in Ireland.

Revered internationally, Cohen has always enjoyed a devoted following in Ireland. In June 2008 he had performed three sell-out concerts at the Royal Hospital Kilmainham, the first such events to be held there. Reynolds had an even bigger idea, a concert under the shadow of Ben Bulben.

On the morning of the first Lissadell concert Cohen rehearsed from about noon until mid-afternoon. He then returned to rest in the coach house, which served as a band dressing room for the weekend.

“I had asked about a week earlier if Leonard Cohen would consider opening the Yeats Gallery I had been assembling by collecting material such as books, prints, paintings, letters and other memorabilia,” says Walsh. “It seemed ideal to ask him but his manager said no. ‘Mr Cohen doesn’t do that kind of thing’ was the firm refusal. It was very formal and I was disappointed.”

Walsh is resourceful though. “I had left all the doors open, deliberately, leading from the Green Room, where he was, to other exhibition areas, culminating in the Yeats Gallery.”

The couple were outside checking the stage, when Walsh’s phone rang. “To my amazement it was the manager who said, ‘Mr Cohen would be honoured if he could be permitted to open the exhibition’. I turned to Constance and said, You’ll never believe this. We were so blown away.”

Meanwhile in the Yeats Gallery, Cohen was standing looking at a signed first edition of A Vision by Yeats, a collection of writings on mystical, philosophical and historical themes. Cohen was also interested in the occult, a subject to which the Gore-Booth sisters had introduced Yeats. “I took the book out of the case and presented it to Leonard Cohen,” recalls Walsh.

“The first of the two concerts at Lissadell even included a rainbow, and the second one finished with a soft west of Ireland mist.”

His lasting impression of Leonard Cohen? “Just sublime, a beacon of light. He lifted everyone’s spirits. Meeting him was the same.”

When I met him during the interval at the Saturday concert, he told me he was a pilgrim. He has come to Lissadell on a pilgrimage. “I’ve always loved Yeats,” he said, smiling his wry smile.

In common with anyone who had met him, I was struck by Leonard Cohen, a gentle, gracious and courtly man. His songs are about being alive; trying to live, love and arrive at some understanding of it all. He loved beauty and understood pain; his songs both ease and console. The rainbow merely added to the magic.