The Dresden Dolls frontwoman has been accused of exploitation for using Kickstarter to finance her albums and for seeking volunteers to play in her band. Her memoir sets the record straight 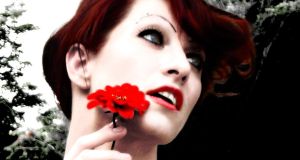 Amanda Palmer: ‘I have a hard time not using myself as a reference point.’ Photograph: Kambriel

There are confessional songwriters, and then there are songwriters who put so much of themselves into their music that you feel like you’re not only intruding on their personal lives, but have invited yourself in for a cuppa and made yourself at home on the sofa. It’s safe to say Amanda Palmer falls into the latter category – so when it was revealed that she would be writing a memoir that hinged on her famous Ted talk from 2013, it was inevitable that it would be interwoven with large chunks of her own fascinating life.

What Ted talk would that be, you ask? Palmer made headlines in 2012 when she launched a Kickstarter crowdfunding campaign for her album Theatre Is Evil. It exceeded its initial goal of $100,000, generating more than $1 million in pre-orders – the largest and most successful crowdfunding campaign ever undertaken by a musician at that point. So far, so admirable.

Then came the backlash. When Palmer announced that she would be continuing the system she had always used – asking local fans to “volunteer” to play in her Grand Theft Orchestra in the various cities she toured in, to supplement her touring band – she was denounced for exploiting her fan base. In true Palmer style – unapologetic, even-handed, intelligent – her Ted talk, dubbed The Art of Asking, tackled the reasoning behind both the campaign and the backlash that had her labelled, by one website, “the most hated woman on the internet”. Most of all, it put forward the motion: it is okay to ask for things. It does not make you a bad person.

It also paved the way for the book of the same title, which was published last November and became a New York Times bestseller. The Art of Asking – or How I Learned to Stop Worrying and Let People Help is part memoir, part self-help book. It recounts the musician’s most creative years – from her time spent as a living statue known as The Eight-Foot Bride in her native Boston, to finding her path in The Dresden Dolls, her solo career and her marriage to sci-fi writer Neil Gaiman.

“I always had an inkling that I would write a book at some point in my life,” she says. “Certainly I had already noticed that there was a lot of poetry connecting my work as a street performer and the rest of my life, but it wasn’t until I started working on the Ted talk, and I felt like 90 per cent of my good ideas were left on the floor because I had to fit this entire concept into a 12-minute talk, which was effectively just a couple of thousand words. So it was a combination of drumming up old material and not using it, and continuously being chased down by a publisher after the Ted talk went huge, and being handed an actual deal and an actual deadline that made it impossible not to do. With everything that was going on in the music industry with crowdfunding and this new era of anger and shame around musicians and money, I thought it was a really good time to write this book.”

Some parts of The Art of Asking were more difficult to write than even she had anticipated. Palmer reveals details of an abortion she had in 2012 after being medically advised to do so; she talks about being sexually assaulted by a fan; she writes about the difficulties she had accepting a loan of money from her husband. There was no point, she says, in keeping anything off the table.

“I have a really hard time not using myself as a reference point,” she laughs. “I’m not good at writing detached stuff; it’s just not my style. And I was so terrified of being judged, you know? But I was also able to step back and say, ‘Ah, if this is uncomfortable to write, it’s probably going to be really interesting to read.’ ”

From recounting her days as The Eight-Foot Bride to finding a place in the Boston artists’ commune The Cloud Club, and from meeting kindred spirit Brian Viglione and forming The Dresden Dolls to detailing her close relationship with lifelong friend and mentor Anthony Martignetti – and his illness – the book is a thoroughly engaging read. Her marriage to Gaiman – who is similarly open about their relationship on Twitter – has given her a new perspective on life, particularly since she is pregnant with their first child.

And the Kickstarter thing? She would do things differently this time around, but not in the way you might think. “I say it in the book: I do wish I’d stuck to my guns a bit more, and allowed the volunteers on my tour to remain volunteers,” she says, shrugging. “Because what I wound up doing at the time felt like the best strategic PR move, but it didn’t actually work and there was a part of me that felt kind of icky for backpedalling on my own system, which I knew did work. There’s a part of me that looks back and thinks ‘I should have strapped my balls on a little bit tighter’. But you know, doing the Ted talk and writing the book – which put things in such a larger context – helps me not feel any regret.”

Writing the book has been an experience, she says, but really it has cemented her faith in the ethos that she has been practicing since she stood up on a pile of milk crates in Harvard Square, in white face paint and a charity-shop wedding dress, handing people flowers and effectively asking them to pay her.

“Y’know,” she says with a deep sigh, “If I’ve learned one big specific blanket thing, it’s that we’re all so driven by fear. Having talked to so many different people from different cultures – Germans, Australians, Japanese, British – the underlying common ground is that we’re afraid that something might happen if we ask for what we need. At first glance, you think that the fear is of simple rejection. That’s the obvious one. But actually, it goes a lot deeper; it’s not so much rejection, it’s the fear that we will be seen as vulnerable.

“When it comes right down to it, across all cultures, vulnerability is like Kryptonite for the human soul. It brings shame. So the best advice that I can give people is in that moment where you want to ask for something and you’re afraid, reframe it; don’t even think that the thing that you’re asking for is necessarily about you. It’s very possible that by asking someone for something, you are giving them the gift of trust and intimacy. And if you can possibly frame it that way, it opens up the entire world: all of a sudden it isn’t just about your fear and your ego.”