Charles Aznavour, the ‘French Frank Sinatra’, is dead at 94

Charles Aznavour, who was known as the "French Frank Sinatra", has died aged 94. 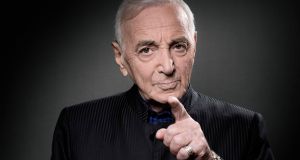 French singer Charles Aznavour has died at the age of 94, French media reported on Monday, citing his spokesman.

Aznavour, who was born Shahnour Varinag Aznavourian in Paris to Armenian parents, sold more than 100 million records in 80 countries.

He was often described as France’s Frank Sinatra and was best known for his 1974 hit She. He was awarded a star on the Hollywood Walk of Fame in 2017.

Aznavour, who was was born on May 22nd, 1924, began his career peddling his music to French artists of the 1940s and 1950s such as Edith Piaf, Maurice Chevalier and Charles Trenet.

He discovered his talent for penning songs while performing in cabarets with partner Pierre Roche, with Roche playing the piano and Aznavour singing.

It was after second World War that Piaf took notice of the duo and took them with her on a tour of the US and Canada, with Aznavour composing some of her most popular hits.

The young Aznavour grew up on Paris’ Left Bank. His father was a singer who also worked as a cook and restaurant manager, and his mother was an actress.

Aznavour’s first public performances were at Armenian dances where his father and older sister Aida sang, and the young Charles danced.

President Emmanuel Macron was a big fan of Aznavour and sang many of his songs during karaoke nights with friends when he was a student, according to former classmates.

She, a romantic ballad in which Aznavour confronts the equal joy and strife in a relationship, nevertheless declaring “the meaning of my life is she” was a global hit. It spent four weeks at No 1 in the UK singles chart, and was also recorded in French, German, Italian and Spanish. The song got a second lease of life when it was covered by Elvis Costello for the soundtrack to the 1999 film Notting Hill, reaching No 19 in the UK.

His personal style was that of a crooner, backed by a jazzy big band, and singing of love and nostalgia. He recorded or performed with artists as varied as Sinatra, Ray Charles, Liza Minnelli, Bob Dylan, Elton John, Jose Carreras, Youssou N’Dour and Julio Iglesias.

Aznavour recorded a duet with Sinatra on the song You Make Me Feel So Young” for the 1993 album Duets. In the same year, Aznavour toured with Minnelli through Europe and the US, performing at New York’s Carnegie Hall. In 2008, he sang with Sting, Celine Dion and other stars on the album Duos.

“He now enjoys the magical status of international musical legend,” Alan Riding wrote in a 1998 New York Times article. “After the death of Frank Sinatra, he may well be the last practitioner of a song tradition that dates back to the 1940s.”

Aznavour’s film career included main roles in François Truffaut’s Shoot the Piano Player in 1960 and the 1974 version of Agatha Christie’s And Then There Were None. He also had a smaller part in the 1979 Oscar-winning movie The Tin Drum.

At the unveiling of Aznavour’s star on the Hollywood walk of fame in 2017, director Peter Bogdanovich said: “Sinatra once said every song is a one-act play with one character, and Charles is an extraordinary actor as well as an extraordinary singer.”

Following a tour to raise money for the 1988 Armenian earthquake, Aznavour became that country’s goodwill ambassador to Unesco in 1995, and received Armenian citizenship in 2008. A year later, he became the Armenian ambassador to Switzerland. In France, he was associated with centre-right politicians, supporting Presidents Jacques Chirac and Nicolas Sarkozy. He became an Officer of the Legion of Honour in France in 1997.

“I am not trying to boast, but I have to admit that for an uneducated son of an immigrant I could have done far worse,” he said on his website. – Reuters, Guardian, Bloomberg